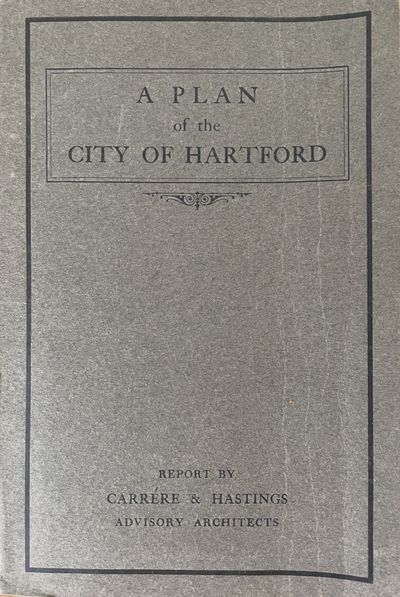 by Carrére, John Merven & Thomas Hastings
117 pp. text comprising the comprehensive report regarding "the rectification of the present plan and the development and extension of the city of Hartford on comprehensive lines of order and harmony with recommendations", prepared by the important New York City-based Beaux-Arts architectural firm of Carrére & Hastings, including discussions of avenues and parkways, building height, the city center and civic buildings, street extensions, residential and industrial areas, the parks system, rivers, railways, traffic, and building preservation. Illustrated throughout with six folding plans and maps and numerous black and white plates from photographs. 8vo. Original brown printed paper wrpps., binding staples visible when covers are opened, some very light wear along spine and minor creasing to front cover, overall very good. Hartford (The Case, Lockwood & Brainard Company/Hartford Press) 1912. The architectural firm of Carrére & Hastings was one of the most important Beaux-Arts firms working in America in the late 19th and early 20th century. Among their most important works were the Ponce de León Hotel and the Alcazar Hotel (now the Lightner Museum) in St. Augustine, Florida, the House and Senate office buildings in Washington, D.C., and the New York Public Library.
This report was Carrére's final work of city planning as shortly after the completion of this work and before its official publication, he died in an automobile and streetcare accident. (Inventory #: 51351)
$550.00 add to cart or Buy Direct from
Bernett Penka Rare Books
Share this item