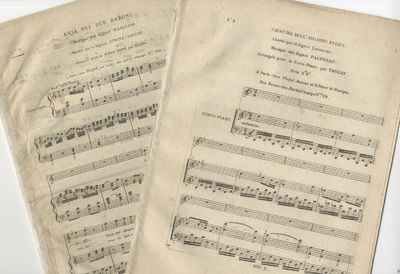 Together with:
NASOLINI, Sebastiano (?1768-1798)
Aria nel Due Baroni ... chanté par la Signora Strina-Sacchi arrangée pour le Piano Forté par Thollé[!]. Paris: Pleyel [PN 511.G.], [ca. 1800]. Folio. Disbound. 7 pp. "No. 7" printed to upper left corner of first page. Spine and edges reinforced with tissue, partially obscuring music on pp. 5-6; publisher's handstamp to p.1; creased; slightly soiled. "Paisiello's popularity was at its height in the last two decades of the 18th century. During that period his dramatic works were as much in demand outside Italy as within it. In Vienna, for example, the Italian opera company installed by Joseph II performed during the 1780s more works by Paisiello than by any other single composer. Londoners too were particularly partial to his operas. The decline in the demand for his music, which became noticeable everywhere after about 1800, was a sign that taste had changed. The works that retained their popularity longest were his best comic operas, including Il barbiere di Siviglia, L'amor contrastato and Nina, but even these went out of the repertory after the 1820s. Thereafter he was remembered as one of the main names in the so-called 'Neapolitan school'. Promoters have revived a few of his operas in the late 20th century, kindling a renewed flicker of public interest." Michael F. Robinson in Grove Music Online.

"Nasolini's early operatic output suggests a devotion to serious opera. His first work, a setting of Metastasio's Nitteti, was performed in Trieste during spring 1788. Following its success, he produced a number of other opere serie, only occasionally interrupted by comic operas ...By the time his Andromaca was performed in London in May 1790, the Public Advertiser could call him 'the most fashionable composer now extant in Italy'." John A. Rice in Grove Music Online. (Inventory #: 36021)
$83.00 add to cart or Buy Direct from
J. & J. Lubrano Music Antiquarians
Share this item