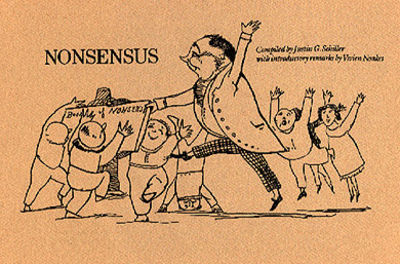 by Schiller, Justin (LEAR, Edward)
SCHILLER (Justin): Nonsensus, Cross-referencing Edward Lear's Book of Nonsense. Stroud: Catalpa Press, 1988. 0 904995 13 5. With an introduction by Vivien Noakes. With black and white illustrations throughout. Oblong 8vo., 133 pp.; printed pictorial wrappers. This volume cross-references Edward Lear's original 116 limericks for his Book of Nonsense from 8 known holograph manuscripts prepared by Lear, and compares them to printed texts from the 1846, 1855 and 1861 printed versions; together with a census of known copies of the genuine first edition. (Inventory #: Nonsensus)
$35.00 add to cart Available from Battledore
Share this item