First Edition 1838 Account of the Black Hawk War: "Have we not more frequently met [the Indians] in bad faith, than in a Christian spirit? 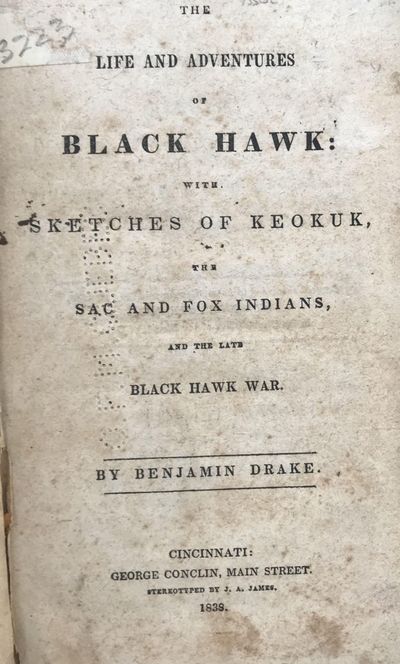 first edition
by Drake, Benjamin
DRAKE, Benjamin. The Life and Adventures of Black Hawk: With Sketches of Keokuk, the Sac and Fox Indians, and the Late Black Hawk War. Cincinnati: George Conclin: 1838. First Edition. Publisher's original dark green cloth. Includes illustrated engraving of "Wabokieshiek, the Prophet" on page 169. Duodecimo. 252pp. A sympathetic account of the travails and trials of Chief Black Hawk and his people: "The Indians are frequently denounced as faithless, ferocious, and untamable [...] the question may be asked, has not the policy of our government contributed, essentially, to impart to them that character? Have we not more frequently met [the Indians] in bad faith, than in a Christian spirit? and sustained our relations with them, more by the power of the sword than the law of kindness?" (Preface) This was the "most widely read account of the war during the nineteenth century." In good condition. Verso board of front cover shos remains of an Ex-Libris Plate. Pages are soiled, and foxed throughout. Minor tears along margins. Inner hinge starting. However the text is quite readable. An invaluable sympathetic perspective on Indian Affairs. (Inventory #: 17225)
$1,450.00 add to cart Available from
Share this item
Max Rambod Inc.
Offered by