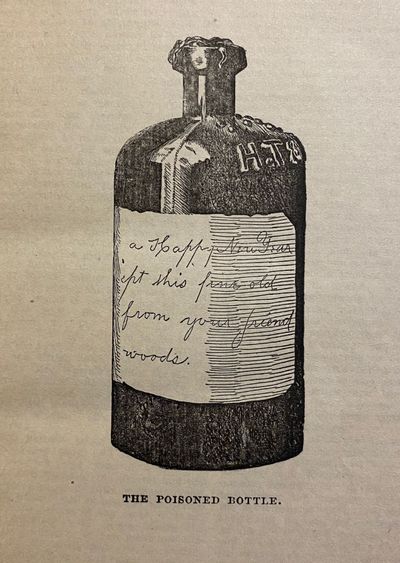 THE SENSATIONAL TRIAL OF DR. THOMAS THATCHER GRAVES FOR THE MURDER (BY POISONING) OF JOSEPHINE A. BARNABY. DENVER, COLORADO, 1891, ILLUSTRATED WITH CURIOUS PORTRAITS.

The trial lasted for six weeks, the longest murder trial in the United States up to that time. As we learn from American State Trials (vol. XIII, 1929, pp. 256 et seq.):

"Mrs. Josephine A. Barnaby, a wealthy widow whose home was in Providence, R. I., had been spending the winter of 1890 at the California health resorts in company with a friend, Mrs. Edward S. Worrell, of Denver. They separated about the first of April, 1891, it being understood that they were to meet in Denver, where Mrs. Worrell was visiting her son. Mrs. Barnaby arrived in Denver April 9th, and joined her friend, who informed her that a package had arrived by mail addressed to her and was waiting for her at the office of her son. The next morning Mrs. Barnaby went to the office to get the package, accompanied by Mrs. Worrell. It was opened there and proved to be a box with a sliding wooden top, with no mark upon it except a Liebig's extract label. Inside was a bottle wrapped in white paper with a piece of paper pasted on the side and written thereon were these words:

"Wish you a happy New Year. Please accept this fine old Whiskey from your friends in the woods."

"Mrs. Barnaby, when she read the inscription, said: "It must be from Bennett." The box the next day was carried to the Worrell residence and taken by Mrs. Barnaby to her room. Two days later the two ladies, after returning somewhat fatigued from a long drive in the country, indulged in a "toddy," which Mrs. Barnaby prepared from the alleged whiskey in the bottle from the woods. They both noticed its bitter taste and in a few minutes were seized with pains, nausea and intense thirst. Physicians were summoned but, after lingering nearly unconscious for a week, Mrs. Barnaby died. In her conscious moments she declared that she had been poisoned and was positive that her friends, the Bennetts, had not sent it and once she exclaimed: "I wonder if it can be possible that Dr. Graves could do such a thing."

"On May 18, 1891, a grand jury returned an indictment charging Dr. Thomas Thatcher Graves with the murder of Mrs. Barnaby. The trial began on November 24th and lasted four weeks. The facts just outlined and many others were proved by witnesses. Medical men declared the contents of the bottle to be a preparation of arsenic of a most deadly character and one not to be purchased ordinarily at a drug store but requiring preparation by a person acquainted with toxocology and chemistry. Experts also gave their opinion that the address on the package and the New Year's greeting on the bottle were in the handwriting of the accused. The jury, after a short consultation, brought in a verdict of guilty and he was sentenced to be hanged.

"The Supreme Court reversed the conviction and ordered a new trial on account of an incorrect instruction of the trial judge, but before it could take place, Dr. Graves defeated his prosecutors by committing suicide [possibly by poisoning] in his cell in the Denver jail."

Scarce in commerce: no copy is listed in Rare Book Hub, which currently has over 10 million records in the Rare Book Transaction Database. Ours is the only copy currently on the market.