[CIVIL WAR] ITINERARY OF THE SEVENTH OHIO VOLUNTEER INFANTRY, 1861-1864. WITH ROSTER, PORTRAITS AND BIOGRAPHIES. [VOLUME I OF II] 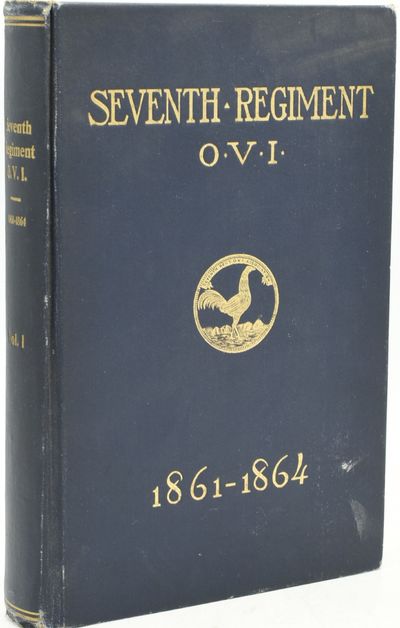 by Lawrence Wilson (Editor)
New York | Washington: The Neale Publishing House, 1907. First Edition. Hard Cover. Very Good binding. Large 8vo.; in the publisher's blue cloth binding; 362 pages; with frontispiece of Camp Denison and a photographic portrait of the author; there are eight additional illustrations in this volume; top edge gilt; no ownership marks (though there is one quite minor pencilled annotation; there is shelfwear to the extremities and a couple of light stains to the upper board.~Krick tells us, helpfully, that the itinerary of the Seventh Ohio went like this: "western Virginia in 1861; 1862 Shenandoah Valley Campaign with Shields; Cedar Mountain, Sharpsburg, Chancellorsville and Gettysburg with the Army of the Potomac; at the New York draft riots; Tennessee in late 1863 including Missionary Ridge; battles around Atlanta in 1864, to mustering out in July of that year. The regiments experiences among those interesting scenes are portrayed in a series of uneven accounts, many of them of questionable validity." ~This two volume (of which, sadly, this is but Volume I) is called by Krick "obscure"; this is narrative volume, and the larger roster volume is not present. In Neale Books: An Update 2020, Mr. Krick informs the avid reader that there was "A four page prospectus, done by Wilson not Neale and dated 1908, [which] explains the publication in detail: total cost of $1600 to print 300 in green and 100 in two-volume blue. Those numbers suggest that the smaller edition may be the fewest ever done by Neale of a large book, and accordingly the rarest."~~Only one of two volumes, but a very uncommon edition. (Krick 200; Krick 2020 update, 22). Very Good binding. (Inventory #: 293889)
$950.00 add to cart or Buy Direct from
Black Swan Books
Share this item

THE CAMPAIGN OF GETTYSBURG

Boston : Small, Maynard and Company , 1912
(click for more details about THE CAMPAIGN OF GETTYSBURG)

LOGIC AND METAPHYSICS IN ARISTOTLE: Aristotle's Treatment of Types of Equivocity and Its relevance to His Metaphysical Theories

Padova : Editrice Antenore , 1970
(click for more details about LOGIC AND METAPHYSICS IN ARISTOTLE: Aristotle's Treatment of Types of Equivocity and Its relevance to His Metaphysical Theories)
View all from this seller>