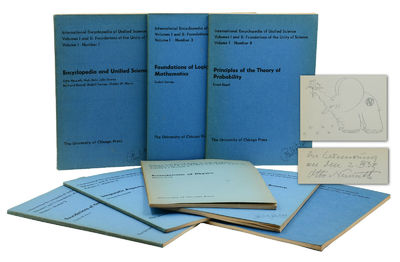 by Neurath, Otto [Editor in Chief]; Niels Bohr; John Dewey; Bertrand Russell; Rudolf Carnap; Charles Morris; Leonard Bloomfield; Victor F. Lenzen; Ernest Nagel; Philipp Frank; E. Finlay-Freundlich; [Paul A. Schilpp]
Chicago: The University of Chicago Press, 1951. First Edition. Near Fine. First editions, first printings. Signed by editor-in-chief Otto Neurath in pencil in margin of the inaugural issue's first essay, his "Unified Science as Encylopedic Integration." Neurath's trademark self-caricature is on the facing page; he pictures himself as an angry elephant (he was apparently a large man) plucking flowers. Author and educator Paul A. Schilpp's copies with his name written on the front wrap of the first six numbers.viii, 75; viii, 59; viii, 71; viii, 59; viii, 59; viii, 80; vi, 78; iv, 59 pp. Volume 1 Numbers 1-8. Publisher's blue wraps: no. 8 stapled, the rest perfectbound. Near Fine with light shelf wear and bumped corners. No. 7's wraps lighter than the others, a few tiny stains to wraps. Notice laid into no. 5. A rare signature an important Austrian-born modernist-- the inventor of ISOTYPE, founder of the Museum of Society and Economy, and key figure in the Vienna Circle-- on one of his greatest achievements.

2. Foundations of the Theory of Signs / Charles Morris

6. Principles of the Theory of Probability / Ernest Nagel