A group of 12 Esquire Magazines, each with an article by Martin Gardiner, most autographed 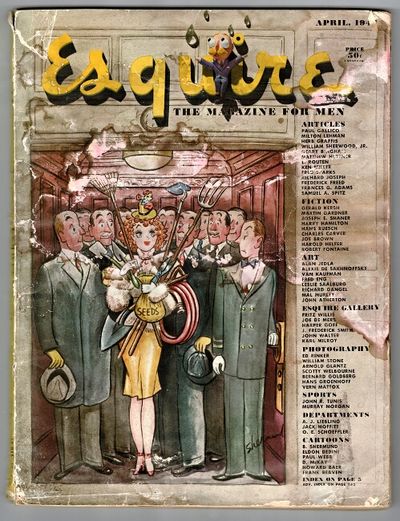 by Gardner, Martin
Chicago: Esquire, Inc, 1950. Large quartos, original pictorial wrappers, all but two signed by Gardner, one of the unsigned a duplicate, generally very good with condition, some edge toning, some small dogears, marks on a few covers, a few other points as noted below. Also included is a one-page typed list of titles, with notes made by the previous owner of this collection based on comments Gardner made to him in 2002, which are duplicated below. According to the previous owner, Gardner had likely not signed any other Esquires outside of this collection. Includes: Oct 1946: "The Horse on the Escalator" Also, 10 Utilities problem, 9 dots with 4 lines, "Six Pack Bezique", "Chess Problem" and Short biography of Gardiner (mentioning he is working on a novel "and you might feel funny" about a Navy veteran and a lady Magician) Jan 1947: "No-sided professor" ("The name means 'slap an ass'.") Short closed tear at fore-edge. April 1947: "The conspicuous turtle" Also, Letter and response to his "No-sided professor" and "Shipwreck Draw" puzzle. Oct 1947: "Flo's Freudian Slips" ("They cut this article terribly. I was very annoyed. I worked hard on it.") Also, the "Send+More=Money" problem. Sept. 1947: "The fall of Flatbush Smith" ("I frequented some Jazz spots in Chicago. I was called 'Moldy Fig,' that is, one who still likes Dixie rather than Progressive Jazz.") Also: "How to Raise a Farm." Jan 1948: "The Lady Says 'Check!'" Also, constructing an equilateral tringle puzzle solution. May 1948: "Dr. Clodhopper's Footsies" March 1948: "The Loves of Lady Coldpence" Also: "New Approach" to "How to Raise a Farm" & "The Art of Coffeehouse Bridge" Sept. 1949: "Love and Tiddlywinks" ("I had forgotten what 'Tiddlywinks' meant." (It meant making love) Also: "These are my Mental Setting-up Exercises: David Shulman" and a short bio of Gardiner. Missing back wrapper and a coupon clipped Feb 1950 "One More Martini" Feb 1952 "Miss Medford's Moon" Unsigned Issue: November 1950: "That old man gloom.". (Inventory #: 58803)
$2,012.50 add to cart or Buy Direct from
Rulon-Miller Books
Share this item