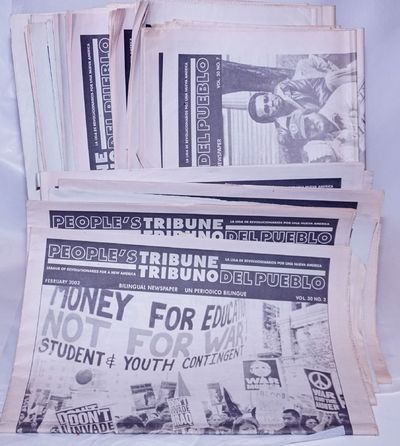 by Peery, Nelson
Chicago: Communist Labor Party of the United States of North America, 2005. Newspaper. Twenty-six issues of the newspaper, published by the Communist Labor Party. These issues are generally good to very good with the original horizontal fold, evenly toned, somewhat curled from storage. Issues present are 2003, Volume 30, Nos. 2-8, 10 [next issue is also No. 10 but dated Jul 14], 11-12 [two distinct issues for No. 12] 13-15, 2004, Volume 21, Nos. 1, 2 [two distinct issues for No. 2], 3 5-7, 9 [again, two distinct issue for No. 9 - Sep and Oct], 2005, one issue only, Volume 32 No. 1. There is an extensive focus on African American issues, including calls for a separate Negro Nation in the earlier issues. Party leader Nelson Peery was one of the most significant Black leaders within the anti-revisionist movement. Other frequent topics include coverage of rank-and-file labor activism and strikes, poor peoples organizing, the struggle against a resurgent Klan, and more. (Inventory #: 267980)
$85.00 add to cart or Buy Direct from Bolerium Books
Share this item