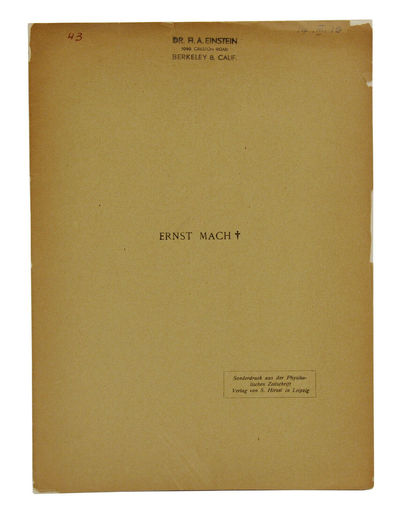 by Einstein, Albert; [Hans A. Einstein]
Leipzig, Germany: S. Hirzel, 1916. First separate edition. First separate edition. 4 pp. Illustrated with portrait of August Mach from photograph. Publisher's original printed wrappers. Very Good with some small chips to fragile wrappers, faint crease to top of front wrap, contents toned with age. This copy belonged to Hans Albert Einstein, Albert Einstein's oldest son, with his inkstamp at top of front wrapper; likely a presentation copy from his father. Neatly written at top of front wrapper is "43" and date "14.III.16." OCLC/WorldCat locates four copies, two at the University of Toronto, one at the Smithsonian Institution, and one at the American Philosophical Society. Weil 89.

Very rare author's offprint (stating "Uberreicht vom Verfasser") of the eulogy by Albert Einstein for fellow physicist Ernst Mach, as first published in Physikalischen Zeitschrift. A noted scientist in his own right, Mach is best known for the concept of "Mach's principle," which asserts that an entity's inertial mass is determined by all the other masses in the universe. Einstein in fact coined the phrase "Mach's principle" and his application of it had major ramifications for the development of his theory of general relativity, Einstein in 1918 labeling it one of the "three pillars" of general relativity. (Inventory #: 140941831)
$9,000.00 add to cart Available from
Burnside Rare Books
Share this item
Burnside Rare Books
Offered by