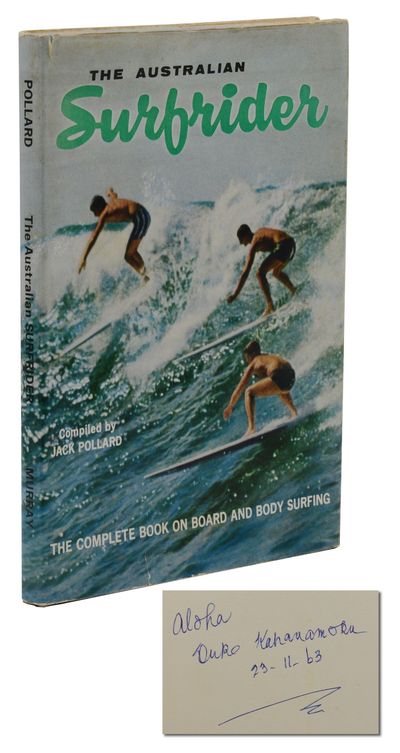 by Kahanamoku, Duke [Forward]; Jack Pollard [Compiler]
Sydney, Australia: Murray, 1963. First Edition. Very Good/Very Good. [ca. 1963]. First edition, first printing. Signed by surfing legend Duke Kahanamoku in 1963 on the front free endpaper. Bound in publisher's original pale blue cloth affect boards with gilt spine lettering. Very Good. Covers mottled, foxed at edges, slight musty odor to pages, light foxing to endsheets. In a Very Good dust jacket with several short edge-tears, one of which has been mended from the blindside, and creasing to the front flap. Kahanamoku, a five-time Olympic medalist in swimming, was a native Hawaiian who is credited with popularizing the sport of surfing, bringing the ancient Hawaiian pastime to a global audience. His 1914 surfing exhibition at Sydney, Australia's Freshwater Beach is widely regarded as a seminal event in the development of surfing in Australia. (Inventory #: 140941895)
$3,500.00 add to cart Available from
Burnside Rare Books
Share this item
Burnside Rare Books
Offered by

New York : Alfred A. Knopf , 1935
(click for more details about Waiting for Nothing)