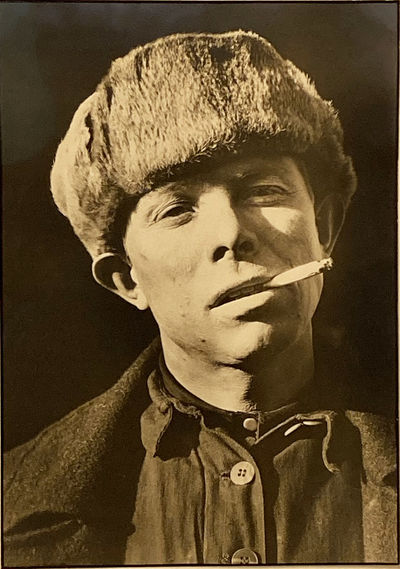 by BOURKE-WHITE, MARGARET
New York: np, 1930. First edition. Photograph framed. Fine. RARE, LARGE SIGNED PHOTOGRAPH BY FEARLESS FEMALE PHOTOJOURNALIST MARGARET BOURKE-WHITE. Photojournalist Margaret Bourke-White holds many crowns. Some have called her "one of photojournalism's most groundbreaking and memorable characters" ( Britannica ); the New York Times referred to her as "one of the world's pre-eminent photographers" and "the female gaze behind Life Magazine"; she held, above all else "the belief in an artist's duty to change the world." ( Connecticut Women's Hall of Fame ). She was the first woman allowed to shoot in combat zones, the first female war photojournalist, and the first female documentary photographer accredited to work with the U.S. armed forces. From Montana to Germany to Russia to North Africa, Bourke-White lent her camera - and her point of view - to capture some of the world's most monumental, disastrous, and powerful moments in history, bringing them (often for the first time) into the center of American public consciousness.

Bourke-White made her start in industrial and architectural photography. To this day, her photographs of the Otis Steel Mill (based in Cleveland, Ohio) are considered some of the best of its kind. Given the dirty and sometimes hazardous conditions of the steel mill, steelmaking photography was understood as being notoriously difficult; more than that, the black-and-white film of the time - which reacted only to blue light - was difficult to use with the red and orange luminesces in the mill. Bourke-White's solution was to use magnesium flares, producing white light to illuminate the scenes around her.

It was her ingenuity and skill that caught the attention of American magazine magnate Henry Luce, who hired her in 1929 for his Fortune magazine. Then, in 1936, she was brought on as one of the first four staff photographers for Life magazine, a publication with which she worked for the next 25 years.

While the particulars are unclear, one can limit the time that this photograph was taken to within the two-year period 1930-32. After completing a Fortune magazine assignment photographing Krupp Iron Works in Germany, Bourke-White continued on into the Soviet Union to photograph the effects of the first five-year plan (1928-32), a campaign implemented by Stalin to develop heavy industry and collectivize agriculture, in an attempt to jumpstart economic growth. Bourke-White was the first foreign photographer to take pictures of the development and effects of the plan.

The 24 Hour Worker, then, is a powerful image focusing on the human cost of the industrial policies adapting to the newly evolving economic landscape of the USSR. In fact, what is particularly compelling about this image is the attention given to the expression and form of the worker's face itself. At the height of her career, Bourke-White began to introduce more people and subject matter into her oeuvre - both in her work with Life Magazine, as well as photographing Dust Bowl communities during the Great Depression (the results of which were ultimately compiled into a photobook titled Have You Seen Their Faces, with accompanying text by husband Erskine Caldwell). Doing so allowed her to develop a more compassionate approach, moving away from style required for the industrial and architectural subjects of her early photography.

The 24 Hour Worker is a powerful example of portrait photography from one of America's photography giants and an important piece epitomizing her important documentary work in the Soviet Union under Stalin.

Signed by Margaret Bourke-White ["Bourke-White"] in the mount below the photograph.

Provenance: From the estate of Evelyne Z. Daitz, the celebrated photography dealer and owner and director of the Witkin Gallery (New York).

np : np , 1980
(click for more details about Two Standing by Indian Lake [Mixed Media Painting])
View all from this seller>