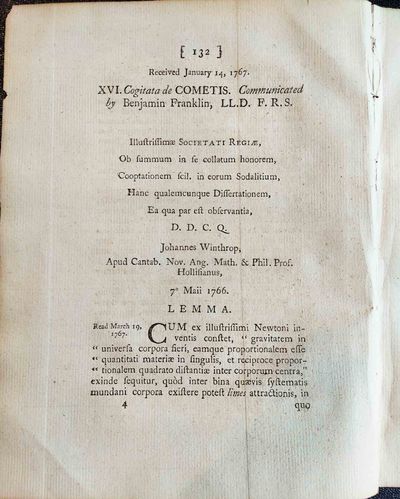 Frequently attributed in error to Franklin, this essay on comets by John Winthrop--Harvard professor of astronomy, grandson of the first governor of Massachusetts Bay Colony--was sponsored and perhaps recited to the Royal Society by Franklin, who was living in London at the time. The text discusses the trajectory, composition,and effects of electricity on the tails of comets. A longtime friend and correspondent of Franklin, Winthrop, with his formal training in physics and mathematics, enabled Franklin to explore fields that were otherwise closed to him, such as here. Franklin did his friend a great favor by delivering the lecture to the Royal Society, and by shepherding it into print. See Franklin's letter to Winthrop, 2 July 1768, in Memoirs of the Life and Writings of Benjamin Franklin. Reference: Ford # 773. (Inventory #: 6453)
$500.00 add to cart Available from
Rare Book Studio
Share this item
Rodger Friedman Rare Book Studio
Offered by