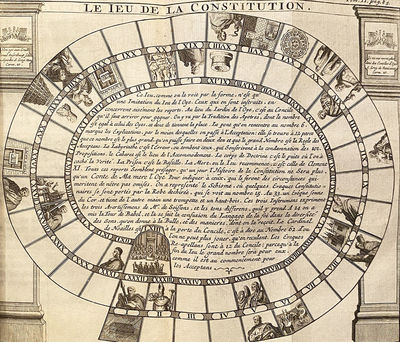 by (Game of the Goose)
(Game of the Goose)
Poesies sur la Constitution Unigenitus. Recueillies par le Chevalier de G..., Officier de Regiment de Champagne. Villefranche [i.e. Amsterdam]: Chez Philalete Belhumeur, 1724. Two volumes. Illustrated with duplicate frontispieces, title-vignettes and many decorative woodcut head- and tail-pieces. 8vo., i, i, xxiv 317 pp. – i, i, 389 pp.; uniform polished tree-calf, extra-gilt, all edges gilt, covers with armorial gilt stamp.
First edition thus, greatly revised and expanded from an earlier version with essays, letters, poems, reviews and songs with political (Constitution), religious (Pope Clement XI) and literary interest. Most important, this work includes an essay titled "Essai du Nouveau Conte de Ma Mere L'Oye" [NewTales of Mother Goose] showing the influence of Perrault's tales barely twenty years after his death AND a handsome folding-out engraved board game titled "Le Jeu de la Constitution" designed in a race-game format.
As a notable compilation of pro-Jansenist writings, of an often satirical nature, with the aforementioned board game (and its five pages of rules) on a folding plate. Selections include: "Les 101 propositions de la constitution Unigenitus exprimées en cent et un couplets"; "Ode pindarique sur la destruction du monastère de Port-Royal-des-Champs"; "Adieu d'une dame janséniste, qui se refugie en Hollande". Brunet 4: 755. Weller 2: 88. Willaert 2: 9370. For the game see Phillippa Plock & Adrian Seville, "Rothschild Collection of Printed Board Games at Waddesdon Manor" [in:] Of Boards and Men: Board Games Investigated, Proceedings of the XIIIth Board Game Studies Colloquium, Paris, 14-17 April 2010, pp. 101-103: "B3 2669.2.25 Le Jeu de la Constitution - 1721/22, or, to give its the full title, Le Jeu / De la Constitution / Sur l'air du branle de Mets (sic) is one of the most controversial games ever devised on the pattern of the game of Goose and perhaps may be regarded as the first polemical variant (Girard and Quétel 1982: 58 and 73). It dates from about 1721 but is associated with a book that appeared a year later, the Essay [Essai] du Nouveau Conte de ma Mère l'Oye ou Les Enluminures de la Constitution. This book contains a folding plate of the game, in smaller format and with some omission of text. It also contains 18 enluminures, in rhymed couplets, which explain the game in detail. The claimed author is given in the subtitle: 'Poesies sur la Constitution Unigenitus, recuellies par le Chevalier de G..., Officier du Regiment de Champagne'. The publisher is given as Philalete Belhumeur ["Good Humour"], Villefranche. These publication details are of course wholly fictitious, as is the claimed author, who in reality was the Abbe é Louis de Bonnaire (1680-1752); the book was published in Amsterdam, the full-sheet game probably in Paris. De Bonnaire was a supporter of the Jansenist heresy [named for Cornelius Jansen 1585-1638]: this theology emphasised a particular reading of Augustine's idea of efficacious grace which stressed that only a certain portion of humanity were predestined to be saved. Though the Jansenists were strongly Catholic, Jesuits and the papacy were suspicious of their beliefs, which seemed to limit free will and the ability to choose to do good or evil. Despite condemnation by Pope Innocent X in 1655, the movement gained strong support in the Church. The Jansenist position, as included in 101 of the propositions of Pasquier Quesnel [Jansenist theologian, b1634 d1719] in his Épitomé des Morales des Évangélistes of 1671, was finally condemned by Pope Clement XI's Unigenitus bull of 1713, but even this condemnation did little to diminish the enthusiasm of adherents. Indeed, in 1717, four French Bishops attempted to appeal Unigenitus to a General Council, a move that received considerable support from other clergy and the parlements, though the majority of clergy stood by the Pope: Clement responded in the next year by excommunicating all those who had called for a General Council. Even so, it was not until 1728 that the death of Jansenism was marked by the submission to the Pope's authority of Cardinal Noailles, Archbishop of Paris, who had originally approved Quesnel's book and was reluctant to support Unigenitus, arguing that many of the 101 propositions were in fact orthodox.

The point of the game and of De Bonnaire's book is to challenge and mock the authority of the Church and in particular that of the Pope and of his bull. For example, the columns on either side are each headed by a cartoon depicting the Pope in council, all present being represented by geese wearing mitres. Below the lefthand cartoon, is the Latin phrase "Non ego cum Gruibus simul Anseribusque sedebo in Synodis - S. Greg. Nazianz Carm. 10" (I shall not sit in Synod with cranes and geese). This refers to a dictum of Gregory of Nazianzus (c329-390), Archbishop of Constantinople, who compared the rowdy Council of Constantinople (381 AD) to the loud cackling of a flock of geese.

The 'good' spaces show the Apostles 'equal in number to that of the geese, which they replace': there are thirteen, including St Paul, and they occupy the traditional spaces. The traditional hazards are likewise replaced or given special significance, and others are added. The usual entry arch appears as Noah's Ark, at space 1, symbolising the Church as it is tossed about on the waters of Unigenitus. The bridge of explanations, at the expected space 6, shows bishops falling into the water, marking their error in taking the wrong sense of the 101 propositions: it leads to space 12, acceptance, where a young woman, blindfolded, is shown as accepting Unigenitus through ignorance. At space 15, there is the torn robe, symbolising schism of the Church. The labyrinth (here at space 16) symbolises error into which fall those who subscribe to the condemnation of the 101 propositions. The inn, at space 19, is here the cabaret, and represents the 'accommodation' (accommodement), or submission of the Jansenists to the bull. The Tower of Babel at space 24 represents the confusion of language into which the bull has fallen. At space 26 is the first appeal, of 1717, represented by a notice on the Vatican door. At space 33 we find the avertissemens or pronouncements of the Archbishop of Soissons [Jean-Joseph Languet de Gergy, 1677-1753], a notorious anti-Jansenist and vehement defender of Unigenitus. He has an oboe, a horn and a trumpet, the three instruments symbolising 'his three avertissements and their different tones': a special rule refers to moving forward with the 'small dice' and with 'the other' when going back. Next is the prison at space 40, where the player must wait until a throw of 5, which multiplied by 3 will lead to Louis XV and deliverance. The well (space 49) symbolises the body of doctrine, in which the truth is hidden. At space 51 are the re-appealing Bishops, the second appeal being at space 53. At space 55 is the portrait of Louis XV - enluminere XV in the book makes clear that he was seen as a force for change and re-unifying the Church. The death space at 58 shows the skeleton of Pope Clement XI, sitting in an armchair wearing his papal tiara and raising his bony hand to bless an infant at his feet, which represents the Unigenitus bull. Cardinal Noailles appears at the penultimate space, 62, from which point 'one may only go backward'. The explanatory text in the centre of the game claims that it 'presages the day that the constitution of the Church will no longer be nothing but un Conte de ma Mère l'Oye' - a Mother Goose tale, here used as a figure of speech for something unbelievable and ridiculous. The winning space at 63 shows that this result is to be achieved by a General Council, in reference to that called for in 1717. De Bonnaire's book was condemned at Arras in 1726. Although his anonymity as author seems to have been effective in protecting him, the publishers (father and son) were thrown into the Bastille. Even today, the game has the power to shock by the force of its imagery. (Inventory #: BB_88102)
$2,000.00 add to cart Available from Battledore
Share this item

1973
(click for more details about Complete Poems for Children edited by James Reeves.)
View all from this seller>