The private life of the late Benjamin Franklin, LL. D. late minister plenipotentiary from the United States of America to France, &c. &c. &c. Originally written by himself, and now translated from the French. To which are added, some account of his public life, a variety of anecdotes concerning him, by M.M. Brissot, Condorcet, Rochefoucault, Le Roy, &c. &c.... 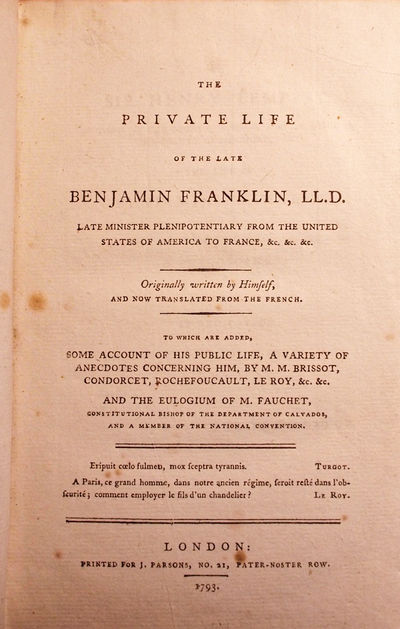 The bibliographer Paul Leicester Ford explains that Franklin wrote the autobiography--a fundamental American text--in four distinct stages in his life, and so four different manuscripts were in circulation at the time of his death in 1790. Thomas Jefferson had one of the copies of the earliest installment, and perhaps his copy landed in the hands of French admirers who shepherded a translation of it into print in Paris in 1791, the first appearance in print of any portion of the autobiography. The London printer J. Parsons had the French edition translated back into English for this London printing of 1793, the first printing, however convoluted, of Franklin's text in his native language. This, according to Ford, became the "popular" version of the Autobiography. (A printed edition of the complete work drawn from the author's original texts did not appear until 1868.) (Inventory #: 6484)
$6,500.00 add to cart Available from
Rare Book Studio
Share this item
Rodger Friedman Rare Book Studio
Offered by