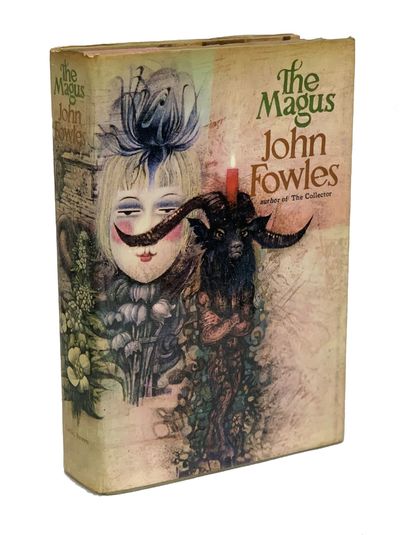 by Fowles, John
Boston: Little, Brown and Company, 1965 First American edition, first printing. Publisher's green cloth, spine lettered in red, red top stain; original pictorial dust jacket designed by Tom Adams depicting characters from Greek mythology. Very good with some toning to spine, rubbing to lettering on spine, some soiling to the bottom edge; unclipped dust jacket with adhesive polyester film protective cover, some light wear to spine ends, tape remnants to rear flap. A bright and very good copy. The Magus follows Nicholas Urfe, a young Oxford graduate and aspiring poet who is mentally deteriorating while teaching on a small Greek Island. Nicholas becomes depressed and falls into a friendship with Maurice Conchis, a wealthy and mysterious man who severs Nicholas' grip on reality through elaborate mind games. The story was inspired by John Fowles' time teaching on the Greek island of Spetses as a young man. The Magus was the first book Fowles wrote but the third to be published. An immediate sensation, the plot reverberated the experimental philosophy of the 1960s, and it was adapted into a film shortly after its publication.. First Edition. Hard Cover. Near Fine/Dust Jacket Included. (Inventory #: JFW005)
$200.00 add to cart or Buy Direct from
B & B Rare Books
Share this item

For Your Eyes Only: Five Secret Occasions in the Life of James Bond.

London: Jonathan Cape , 1960
(click for more details about For Your Eyes Only: Five Secret Occasions in the Life of James Bond.)

From Russia, With Love

London: Jonathan Cape , 1957
(click for more details about From Russia, With Love)
View all from this seller>