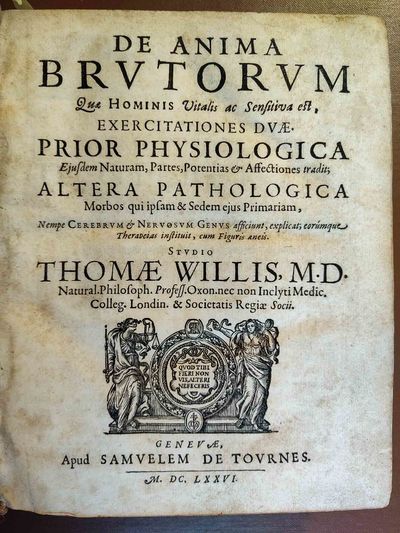 by Willis, Thomas.
Geneva: Samuel de Tournes, 1676-1677. Good. Three titles in one volume. Quarto (23 cm). De anima brutorum, [32], 333, [11] pages, and 8 engraved plates (three of them folding); Pharmaceutice rationalis I: [16], 204, [4] pages, and 6 engraved plates (five of them folding); Pharmaceutices rationales pars seconda: [16], 266, [6] pages, and 8 plates (3 of them folding). Printer's device on title pages; engraved initials, headpieces and tail-pieces. In contemporary full calf, rather worn, with gilt-tooled decorations on spine quite faded. Leather title label reads "Opera WIllis Medic. Tom. II," indicating that the works were bound as part of a set (The Geneva editions of 1676 and 1677 were issued as separate titles that could be bound together to form a set). Small finger-chip at head of spine. Scattered foxing, noticeable in places. Bookplate of Dr. Alfred Jerome Brown (1878-1960) designed and engraved by Edwin Davis French. References: Garrison-Morton, 62; Kivatsky, 12998.

The second work, in two parts, bears the subtitle, "diatriba de medicamentorum operationibus in humano corpore." There are chapters on opiates, on arrythmias, and many other conditions, including diabetes (Willis is responsible for naming diabetes "mellitus," due to the sweet flavor of diabetic urine). (Inventory #: 6438)
$1,250.00 add to cart Available from
Rare Book Studio
Share this item
Rodger Friedman Rare Book Studio
Offered by

by Commissione sull'Acque a Ferrara.