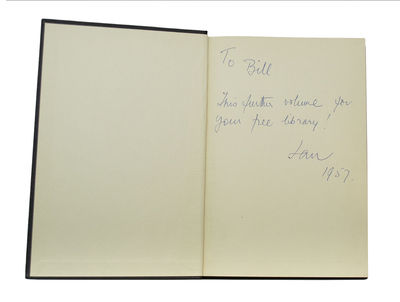 by FLEMING, Ian
Inscribed by Fleming to Sir William Stephenson, Who was Known as the "Real James Bond" FLEMING, Ian. The Diamond Smugglers. London: Jonathan Cape, [1957]. First edition. Inscribed by Ian Fleming on the front endpaper to Sir William Stephenson, who was known as the "Real James Bond." Small octavo (7 7/8 x 5 1/4 inches; 200 x 135 mm). [10], 11-160 pp. In original dust jacket. Publisher's full black cloth. Spine lettered in white. Book is about fine. In a near-fine price-clipped dust jacket. Jacket spine very lightly sunned. One small tape repair on to inside of front panel. With a second jacket, price not clipped. Housed in a custom black morocco clamshell. Inscription reads: "To Bill/ This further volume for/ your free library!/ Ian/ 1957" A wonderful book with an exceptional provenance. Inscribed by Fleming to his good friend Sir William Stephenson, aka "Bill." We acquired this copy from the grandson of famous auto maker. E.L. Cord. Cord, Fleming and Stephenson were all close friends and Cord and Stephenson owned an airplane factory together producing spitfires. Cord acquired Bill's collection of Fleming books and his grandson eventually took ownership. Butterfields and Butterfields sold three other Fleming books inscribed to "Bill" acquired from the same source at their 4/16/1997 sale. Our inscription recipient Sir William "Bill" Stephenson is of utmost interest as he is considered the basis of the character of James Bond. Sir William "Bill" Stephenson, was a "Canadian soldier, airman, businessman, inventor, spymaster, and the senior representative of British Security Coordination (BSC) for the entire western hemisphere during World War II. He is best known by his wartime intelligence codename Intrepid. Many people consider him to be one of the real-life inspirations for James Bond. Ian Fleming himself who once worked under Stephenson, once wrote, 'James Bond is a highly romanticized version of a true spy. The real thing is ... William Stephenson.'... As head of the British Security Coordination, Stephenson handed over British scientific secrets to Franklin D. Roosevelt and relayed American secrets to Winston Churchill. In addition, Stephenson has been credited with changing American public opinion from an isolationist stance to a supportive tendency regarding America's entry into World War II... Stephenson was soon a close adviser to Roosevelt, and suggested that he put Stephenson's good friend William J. "Wild Bill" Donovan in charge of all U.S. intelligence services. Donovan founded the U.S. Office of Strategic Services (OSS), which in 1947 would become the Central Intelligence Agency (CIA). As senior representative of British intelligence in the western hemisphere, Stephenson was one of the few persons in the hemisphere who were authorized to view raw Ultra transcripts of German Enigma ciphers that had been decrypted at Britain's Bletchley Park facility. He was trusted by Churchill to decide what Ultra information to pass along to various branches of the U.S. and Canadian governments... Not least of Stephenson's contributions to the war effort was the setting up by BSC of Camp X, the unofficial name of the secret Special Training School No. 103, a Second World War paramilitary installation for training covert agents in the methods required for success in clandestine operations. Camp X graduates operated in Europe (Spain, Portugal, Italy and the Balkans) as well as in Africa, Australia, India and the Pacific. They may have included Ian Fleming (though there is evidence to the contrary), future author of the James Bond books. It has been said that the fictional Goldfinger's raid on Fort Knox was inspired by a Stephenson plan (never carried out) to steal $2,883,000,000 in Vichy French gold reserves from the French Caribbean colony of Martinique... For his extraordinary service to the war effort, he was made a Knight Bachelor by King George VI in the 1945 New Year Honours. In recommending Stephenson for the knighthood, Winston Churchill wrote: 'This one is dear to my heart.' In November 1946 Stephenson received the Medal for Merit from President Harry S. Truman, at that time the highest U.S. civilian award. He was the first non-American to be so honoured." (Wikipedia) "Camp X was the unofficial name of the secret Special Training School No. 103, a Second World War British paramilitary installation for training covert agents in the methods required for success in clandestine operations.[1] It was located on the northwestern shore of Lake Ontario between Whitby and Oshawa in Ontario, Canada. The area is known today as Intrepid Park, after the code name for Sir William Stephenson, Director of British Security Co-ordination (BSC), who established the program to create the training facility." (Wikipedia) Accompanying the book is a letter from the individual we acquired the book from, the grandson E.L. Cord stating who he is and that he is selling the book. Included also is a family tree showing the seller as E.L. Cord's grandson. HBS 68524. $27,500 (Inventory #: 68524)
$27,500.00 add to cart Available from
Heritage Book Shop
Share this item