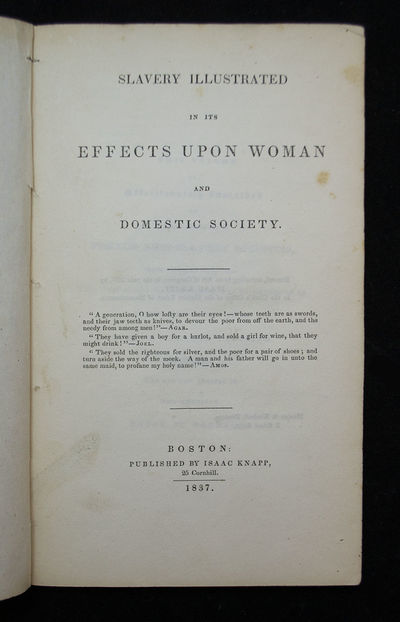 by BOURNE, George
First Edition of Abolitionist George Bourne's Work on the Negative Affects of Slavery on Women [BOURNE, George]. [WOMEN]. Slavery Illustrated in its Effects Upon Woman and Domestic Society. Boston: Isaac Knapp 1837. First edition. Twelvemo (7 3/16 x 4 7/16 inches; 182 x 112 mm). [4], [i]-viii, [9]-127, [1,blank] pp. Authorship attributed to Bourne in the 1972 reprint edition. With a woodcut on page [i] of a kneeling female slave with the caption "Am I Not a Woman and a Sister." This woodcut was designed by Abolitionist poet Elizabeth Chandler and is accompanied by a poem by Chandler. The image is a nod to a similar woodcut with caption that reads "Am I Not A Man and a Brother" which appears on the 1837 broadside publication of John Greenleaf Whittier's antislavery poem, 'Our Countrymen in Chains.' "The design was originally adopted as the seal of the Society for the Abolition of Slavery in England in the 1780s, and appeared on several medallions for the society made by Josiah Wedgwood as early as 1787.(Library of Congress)." There are a number of stanzas of Abolitionist and Quaker poet Whittier's writings printed throughout this present work. We could find no copies of this at auction in over 100 years. Disbound pamphlet. Some minor foxing and smudging to title-page, otherwise very clean and crisp. With previous owner Edward Hopper's signature on title-page. Possibly related to the esteemed Quaker Abolitionist and Underground railway operator, Issac Hopper. This work consists of seven chapters entitled: I. Introductory II. Marriage III. Condition of Female Slaves IV. Effects of Slavery upon Domestic Relationships V. Duty of the Slave-holder's Female Relatives VI. Impurity of the Christian Churches VII. Duty of Northern Christian Women. George Bourne was a clergyman and abolitionist who was born in England and immigrated to Baltimore Maryland in 1804. Where he became a journalist. He became a Presbyterian minister in Virginia where the anti-slave sentiment was strong and he became convinced that anyone who "who holds Slaves and who pretends to be a Christian or a Republican, is either an incurable idiot ... or an obdurant sinner" (Christie and Dumond, p. 105). "Between 1810 and 1815 he began excluding slave owners from his congregation and sought to convert the Presbyterian church to his antislavery views. At the 1815 Philadelphia Presbyterian General Assembly, Bourne shocked delegates by questioning the Christianity of individuals who owned slaves, condemning them as 'man-stealers.' Heckling and attempts to silence him only incensed Bourne, who became more vehement in his condemnations. He charged ministers who owned slaves at the time of their ordination with violating church rules and Christian doctrine and repudiated the assembly's attempt to restore peace as 'deceptive and two-faced'... Although usually remembered as one of the first radical abolitionists, Bourne was also one of the earliest leaders of the American nativist, or anti-Catholic, crusade. Bourne's abolitionism and virulent nativism shared the same evangelical Protestant foundation, commitment to freedom and liberty, abhorrence of tyranny, and a prurient obsession with the sexual exploitation of women... The plight of the women who suffered under the tyranny of Jesuits in [his fictional writing] 'Lorette' are indistinguishable from the real-life horrors that Bourne outlined in "Slavery Illustrated in its Effects upon Woman and Domestic Society" (1837). To Bourne, the convent and the 'slave States are one vast brothel'... Bourne remained committed to abolitionism and nativism for the remainder of his career. He was a founding member of the American Anti-Slavery Society (1833) and a frequent contributor to [William Lloyd] Garrison's famous paper the 'Liberator.'" (Oxford Dictionary of National Biography). According to Garrison '[Bourne] was one of the earliest, most uncompromising and powerful opponents of slavery in the United States... Next to the Bible, we are indebted to his work for our view of the system of slavery." However "The thrust of Bourne's antislavery position rested on religious premises." According to David Brion Davis "Bourne was far more interested in the purification of religion than in slavery as an institution." "Bourne's regions values were certainly central to his abolitionism, but his antislavery arguments rested as much if not more so on concerns regarding female sexual purity, marriage, and the family. His focus on the way in which slavery threatened domestic relations heightened by the 1830s, as reflected in his book, Slavery Illustrated in its Effects Upon woman and Domestic Society." (Escaped Nuns: True Womanhood and the Campaign Against Convents in Antebellum, By Cassandra L. Yacovazzi). To this, Bourne pleads with Christian women of both the North and South to speak out against slavery in hopes of keeping the Christian religion pure of the sins of slavery. Sabin 82088 HBS 68534. $2,500 (Inventory #: 68534)
$2,500.00 add to cart Available from
Heritage Book Shop
Share this item