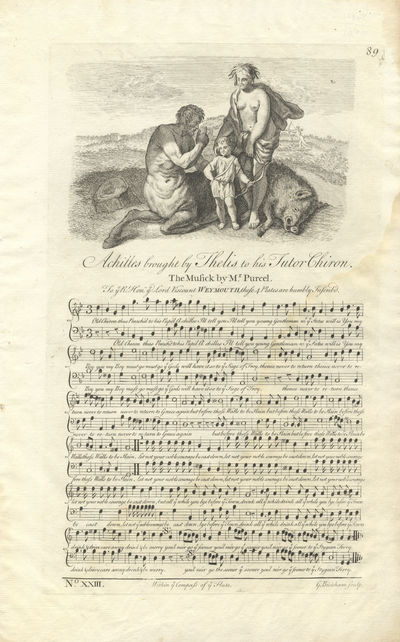 "[Purcell] was one of the most important 17th-century composers and one of the greatest of all English composers." Peter Holman and Robert Thompson in Grove Music Online.

"[Bickham ?1706-1771] was principally famous in music circles for his two illustrated folio volumes The Musical Entertainer, first issued in fortnightly parts, each containing four plates, from January 1737 to December 1739. The 200 plates are songs, headed and surrounded with pictorial embellishments illustrative of the song ..., and engraved in the style of and even copied directly from Gravelot and Watteau. This work was the first of its kind to be published in England and quickly produced imitators such as Lampe's British Melody, engraved by Benjamin Cole." Frank Kidson et al. in Grove Music Online.

The Musical Entertainer is considered one of the finest 18th century illustrated books. Complete copies of this monumental work are exceptionally rare. (Inventory #: 36821)
$121.00 add to cart or Buy Direct from
J. & J. Lubrano Music Antiquarians
Share this item

The Generous Lassie. Plate 92 from George Bickham's The Musical Entertainer

London 1740
(click for more details about The Generous Lassie. Plate 92 from George Bickham's The Musical Entertainer)
View all from this seller>