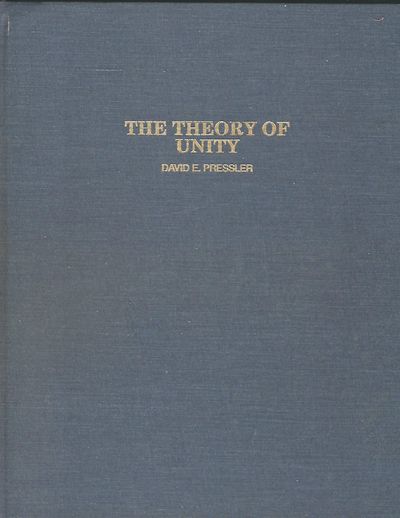 by PRESSLER, David E.
[Goshen, IN: Primary Nuclear Research], 1996. First Edition. Signed "David E. Pressler, Oct.7 1996" on the front endpaper. Also, with an autographed letter signed from Pressler laid in, on Primary Nuclear Research stationery, to Clyde T. Lofton Jr., thanking him for ordering the book and stating that the ideas in the book will hopefully "become the science of the 21st Century." With two very small clipped articles tipped to the letter. Pressler writes about the real theory of relativity is presented in detail. The enigma of mass, distance, space & time are explained and the concept of particles & waves is also described in detail. A chart of 90 of the most important particles resonances to seven decimals is included. The unified field theory, long sought by scientists, which unifies the four forces: gravity, electromagnetic, the string & weak forces is simply defined. C-space, a three-dimensional condensation of space-time. Action at a distance is now a field effect rather than a particle exchange. The book tells how the atom works without quantum physics principle & the Heisenberg uncertainty principle. The new Cosmology "proves" a non-expanding universe. There is no big bang! There are no black holes! There are no gravity waves! Philosophical, religious, & social implications are discussed. Large quarto, blue cloth, stamped in gilt;. Very Good (covers nice & bright; contents clean & tight). (Inventory #: 57532)
$500.00 add to cart or Buy Direct from Antic Hay Books
Share this item
Antic Hay Books
Offered by

SMOKE ALONG THE COLUMBIA

ART OF THE CHOPPER

[St. Paul, MN : Motorbooks International , 2003
(click for more details about ART OF THE CHOPPER)
View all from this seller>