The Man Without A Country 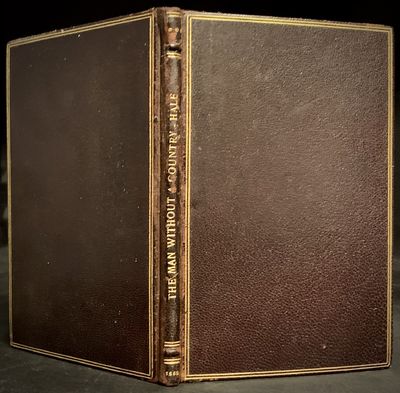 by Hale, Edward Everett
Boston: Ticknor And Fields, 1865. First edition. leather_bound. Later full black morocco, spine lettered in gilt, rebacked. Teg. Near fine. 23 pages. 16.5 x 11 cm. The story of an American Army lieutenant Philip Nolan, who renounces his country during a trial for treason and is consequently sentenced to spend the rest of his day as sea without so much as a word of news about the United States. The story was first published in the Atlantic Monthly in 1863 to bolster support for the Union Army during the Civil War. Hale's tale was so convincing many readers believed it to be a true story. Bookplate of John Gribbel St. Austell Hall, front cover pastedown, inner dentelles, double gilt cover border fillets, marbled endpapers. (Inventory #: 22943)
$600.00 add to cart or Buy Direct from
Roy Young Bookseller
Share this item
Roy Young Bookseller, Inc.
Offered by

The Fables Of Aesop And Others Translated From Human Nature; Revised And Drawn On The Wood Engraved By Swain

London : W. Kent & Co & Bradbury and Evans , 1857
(click for more details about The Fables Of Aesop And Others Translated From Human Nature; Revised And Drawn On The Wood Engraved By Swain)

New York & London : Frederick Warne And Co , 1913
(click for more details about The Tale Pigling Bland)
View all from this seller>