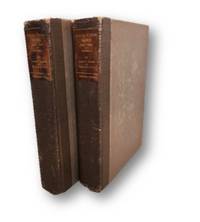 A women's suffrage leader and abolitionist, Howe is best known for penning "The Battle Hymn of the Republic." This biography authored by her two daughters compiles for the first time a large portion of her unpublished work. Includes a tipped-in manuscript in Vol. 1 in Howe's hand, in which she writes 19 lines about the American system's need to avoid "holding on to Aristocratic traditions." In part, "I know there are difficulties connected with the treatment of this question, for I have encountered them myself. Only if we try to think of all in the direction of progress, & are we not many when we encounter difficulties? Look at the opposition which any acknowledged doctrine makes to a new one. See how slowly & unwillingly mankind ever find out that they have been in the wrong...See the old systems of astronomy reluctantly giving place to the Copernican system. See Europe holding on to Aristocratic traditions..." This volume is in good condition, lacking the original dust jacket which is an early example meant only as protection and generally discarded. Original brown paper boards, with leather insert bearing the title in gilt on the spine. The leather has modulated in color over time, and the tops and bottoms of spine show light fray. However, internally clean and bright. The primary value of this volume is the original manuscript in the hand of Howe, of which this copy has a stellar unique example. BAL 9530. (Inventory #: 15583)
$550.00 add to cart Available from
Share this item
Max Rambod Inc.
Offered by

Ralph Waldo Emerson Sends Warm ALS and Gift to a Friend, Days Before She Marries Into His Family, 1873


(click for more details about Ralph Waldo Emerson Sends Warm ALS and Gift to a Friend, Days Before She Marries Into His Family, 1873)


(click for more details about Ralph Waldo Emerson ALS on Postponing Lecture to Celebrate Thanksgiving, 1867)
View all from this seller>