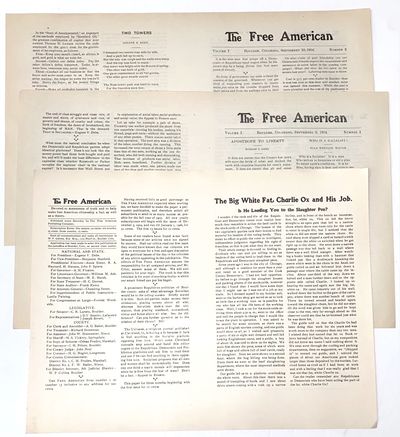 Boulder, CO: Free American Publishing Company, 1904. Newsletter. Three issues of the weekly Socialist publication from the time of Eugene V. Debs' 1904 presidential run. Intended to be folded to make a four-panel newsletter, but these issues, in virtually pristine condition, remain unfolded. Formerly quite scarce, we have obtained a trove of these three issues. About 9x14 inches laid flat, though dimensions vary between the three, with the last issue shorter along the horizontal axis. Contents include efforts to rebut the notion that voting Socialist would only help the Republicans, the platform of the Socialist Party of Colorado as adopted July 4, 1904, a poem by Isalene B. Reed titled "Two Towers," lists of the national and local electoral slates for the Socialist Party, Debs' "Apostrophe to Liberty," Ella Wheeler Wilcox's "Who is a Socialist?" and many other brief items on the local and national scene. (Inventory #: 271765)
$75.00 add to cart or Buy Direct from Bolerium Books
Share this item