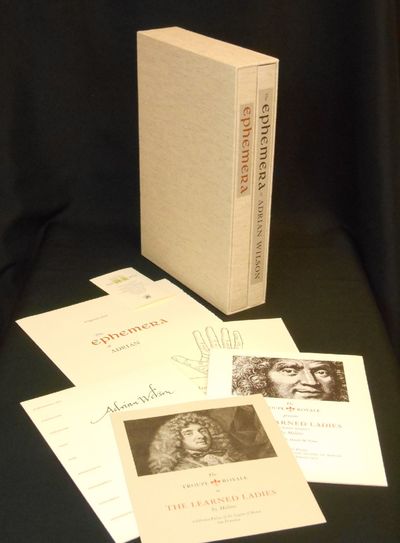 by [Adrian Wilson, Printer] James Linden and Joyce Lancaster Wilson
San Francisco: The Press in Tuscany Alley, 1994. First and Limited Edition. Hardcover. Fine. One of 75 copies (unnumbered), elephant folio size, 156 pp., with numerous specimens in a custom box, with prospectus and "El Paso keepsake", signed by James Linden. A tour de force of the ephemeral printing of the inimitable Adrian Wilson who, with his wife Joyce Lancaster Wilson, produced some of the finest and interesting private press work in San Francisco during the second half of the 20th century.

The Press in Tuscany Alley was one of San Francisco's small private press jewels. Adrian Wilson (1924-1988) was both a book designer and a scholar, authoring "The Design of Books" which is regarded as a classic text on book design. As the New York Times stated in his obituary: "Mr. Wilson designed and printed scores of books, and became a mentor to younger men and women eager to learn the printer's craft. His many volumes, while little-known to the general public, are famous among print connoisseurs, and many are collector's items."

This spectacular work pays homage to the ephemeral work of Adrian Wilson, in which both his perfection of technique and whimsicality shine through. Housed in a custom slipcase are, first, a volume which contains the bibliographical information on Wilson's ephemera; not only does it present tipped-in specimens, but almost every page has either a printed and coloured cut or an illustration which has been hand-coloured. Second is a folding box which is stuffed with samples of the ephemera (over forty pieces by our count).

For any aficionado of private press printing, this work is a bounty of both information and visual delight.

___DESCRIPTION: The volume is bound in natural linen boards, Adrian Wilson's signature debossed in blind on the front board, paper label on the spine, fore-edge uncut, bottom edge rough-cut, a single piece of ephemera loosely laid in at the front, half-title in red with a green cut, frontis a black-and-white photograph of Wilson examining a sheet in his printing studio, title page in red and black, sectional headings and page numbers in red throughout, a mulitiplicity of specimens and illustrations throughout, signed and dated in pencil by James Linden at the colophon; designed and hand-coloured by James Linden, text in Janson on Rives Heavyweight, with end-papers of a special J. Barcham Green Handmade Tovil with Adrian Wilson's type-juggler logo as the watermark, elephant folio size (15 3/4" by 10 1/2"), 156 pp.; this copy one of 75 standard copies (there were also ten special deluxe copies). The folding box entirely covered and lined with natural linen with Adrian Wilson's signature debossed in blind on the front, paper spine label, containing approximately 40 pieces of ephemera. Both items contained within a custom slipcase also covered with the natural linen with a paper spine label, measuring 16 1/8" high by 10 3/4" wide by 3" deep.

___CONDITION: The entire work is fine and as new; we acquired this directly from the printer; clean and crisp throughout with absolutely no wear or markings.

___POSTAGE: Please note that this is an extremely large and heavy work and therefore additional postage may apply; please inquire for details.

___Swan's Fine Books is pleased to be a member of the ABAA, ILAB, and IOBA and we stand behind every book we sell. Please contact us with any questions you may have, we are here to help. (Inventory #: 20110908)
$1,980.00 add to cart or Buy Direct from
Swan's Fine Books
Share this item