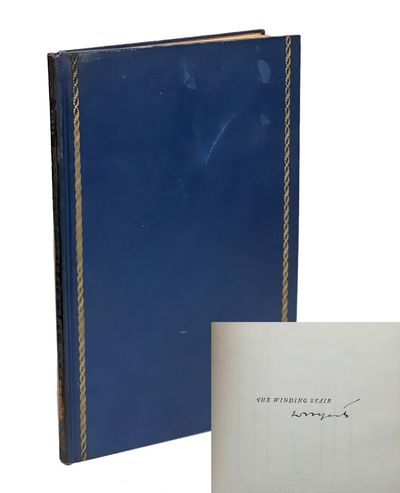 by Yeats, William Butler
New York: The Fountain Press; London: Chatto & Windus, 1929 First edition, first printing. One of 600 numbered copies signed by the author on the half-title. Publisher's dark blue cloth, with gold spiral patterns stamped in gilt to the boards, spine lettered in gilt with two red morocco labels, top edge gilt, fore-edges and bottom edges uncut, purple endpapers flecked with gold and lined in white, printed on Kalmar paper. A very good or better copies, light wear to the extremities, a few minor spots to the cloth, spine gilt a bit dimmed, lower spine label chipped; internally, very clean with only some fading to the endpapers and pastedown, minor dampstain to upper inner margin. Overall, a very attractive copy. Wade 164. The Winding Stair is a collection of six poems: "In Memory of Eva Gore Booth and Con Markiewicz," "Death," "A Dialogue of Self and Soul," "Blood and the Moon," "Oil and Blood," and "A Woman Young and Old." Like his previous collection of poetry, The Tower (1928), the title and poetry in The Winding Stair was written at and inspired by Yeats' home, the Thoor Ballylee Castle in Galway, Ireland. The castle is a fortified tower home, originally built in the 15th or 16th century, that is today colloquially known as "Yeats' Tower." In both of these works, the poems contain the central themes of the Easter Rising and Irish Civil War. As Yeats writes in this volume's "Notes," "My poems attribute to [Thoor Ballylee] most of the meanings attributed in the past to the Tower - whether watch tower or pharos, and to its winding stair those attributed to gyre or whorl. What those meanings are let the poems say." . Signed by Author. First Edition. Hard Cover. Very Good. (Inventory #: WBY024)
$2,750.00 add to cart or Buy Direct from
B & B Rare Books
Share this item