Life and Times of Catherine de' Medici, The 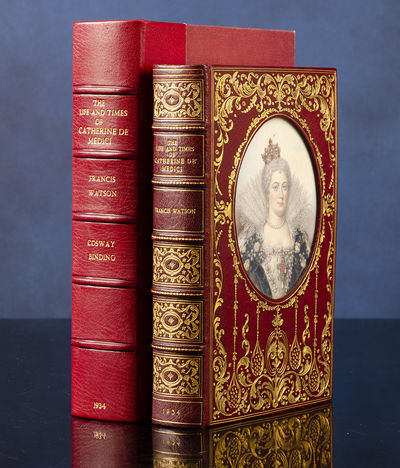 Limitation statement at front "This is No. 912 of the Cosway Bindings invented by J. H. Stonehouse, with Miniatures on Ivory by Miss Currie. Signed (in blue & black ink) 'J.H. Stonehouse' Inventor. 'C.B. Currie' Artist."

Cosway Bindings: In the first decade of the twentieth century, the London bookselling firm of Henry Sotheran & Co., introduced a type of binding that was decorative, had historic associations, and catered to the level of quality expected by connoisseurs at the time. Between 1902 and 1903, John Harrison Stonehouse (1864-1937), managing director of Sotheran's, created what came to be referred to as "Cosway bindings." These were named after the celebrated eighteenth-century English portrait miniaturist Richard Cosway (1742-1821). Cosway bindings are distinguished by their attractive, finely painted miniatures that are protected by glass and inset into the covers or doublures (inside covers) of elegantly tooled books. Stonehouse's success with the bindings was due in part to his employment of skilled miniaturist, Miss C. B. Currie. It has been estimated that Miss Currie painted several thousand miniatures, recognized for their delicate rendering and precision, for over nine hundred bindings before her death circa 1940. For many of the more lavish Cosway bindings, Currie painted multiple portraits. Occasionally, landscapes and other subjects adorn the covers or doublures. To enhance Currie's miniatures, Stonehouse arranged for the London firm of Rivière & Son to produce a variety of high-quality single-volume bindings. One of the best large-scale binderies active in the first quarter of the twentieth century, Rivière & Son integrated the miniatures into bindings for both previously published editions and new works. Stonehouse marketed Sotheran's finished Cosway-bound volumes primarily to booksellers in the United States or to American agents. Before Sotheran's 1911 catalogue, in which they identified the miniature artist as Miss Currie, the miniatures are attributable only by their recognizable style. By 1913, many of the bindings were distinguished by a limitation statement on a colophon leaf (where a publisher's emblem or trademark is placed), which provides the number of the Cosway binding with facsimile signatures of Stonehouse and Miss Currie. The customary gilt-stamped signature on the turn-in is generally lettered: "Bound by Rivière & Son from Designs by J. H. Stonehouse" and "Miniatures by C. B. Currie."

"Miss C.B. Currie" (December 12, 1849 - April 2, 1940) was the miniaturist artist of all the genuine Cosway bindings. Born in Cornwall, England, Caroline Billin Curry was also one of the most prominent fore-edge artists in the twentieth-century. A master of the art of miniature painting, she excelled as a copyist working for Henry Sotheran Booksellers, London. She became famous for her miniature paintings applied to two art forms. First, mounted on Rivière bindings and named by her employer as "Cosway" bindings. Later she expanded her work into the art of painting on the fanned edge of a book - called a fore-edge painting.

Catherine de' Medici (1519-1589) was an Italian noblewoman. She also was queen consort of France from 1547 until 1559, by marriage to King Henry II, and mother of kings Francis II, Charles IX and Henry III. The years during which her sons reigned have been called "the age of Catherine de' Medici" as she had extensive, if at times varying, influence in the political life of France. (Inventory #: 05209)
$18,500.00 add to cart or Buy Direct from
David Brass Rare Books
Share this item