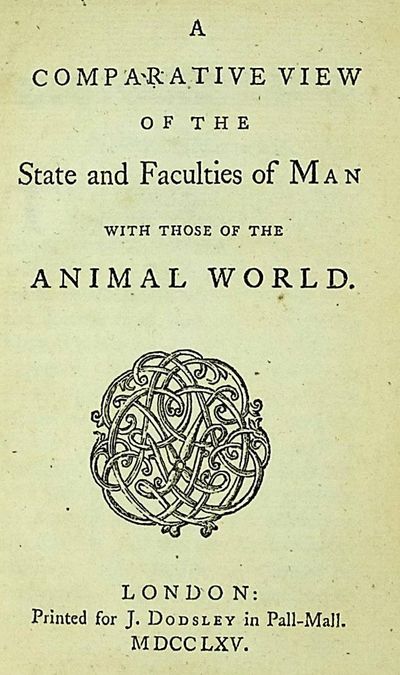 JOHN GREGORY (1724 – 1773) was an eighteenth-century Scottish Enlightenment physician, medical writer and moralist. Following the death of his father when he was eight years old, in 1742 he and his mother moved to Edinburgh where he studied medicine. Gregory went to Leiden to continue his studies in 1745. In 1746, soon after receiving his degree, he was appointed professor of philosophy at King's College. In 1756 he was elected a fellow of the Royal Society. Gregory subsequently returned to Aberdeen to take up another academic post. He became an active member of Aberdeen Philosophical Society which he had co-founded. The papers he presented there were later collected and published anonymously in 1765 in A Comparative View of the State and Faculties of Man, with those of the Animal World (offered here). Gregory moved to Edinburgh in 1764, where he established a medical practice. Two years later Gregory was appointed the first physician in Scotland to George III and made a member of the faculty of Edinburgh University. Between 1767 and 1769, Gregory gave a series of lectures on medicine and he published some of his lectures as Observations on the Duties and Offices of a Physician and on the Method of Prosecuting Enquiries in Philosophy (1770). These writings have been called "the first philosophical, secular medical ethics in the English language". ). Gregory believed in a universal human nature that could be discovered through scientific experiment. The most important elements of human nature, as he saw it, were reason and instinct. He wrote that "the task of improving our nature, of improving man's estate, involves the proper development and exercise of the social principle and the other principle of instinct, with reason subordinate to instinct and serving as a corrective on it". Studying the natural world leads to a cultivation of good taste and religious understanding for Gregory. Of note, Thomas Jefferson gave 7th edition of A Comparative View to his daughter Martha.

HARRY LIONEL SHAPIRO (1902 – 1990), an American anthropologist and eugenicist, made a number of significant contributions to biological anthropology, most notably his inquiries into racial mixture and the role of the environment and geography in determining racial characteristics. He also contributed to the foundations of forensic anthropology in the United States and is further distinguished by being the first in an influential series of doctorates produced under the aegis of Earnest Albert Hooton (1887-1954) at Harvard between 1925 and the early 1950s, a generation that contributed significantly to the development of academic physical anthropology in the United States. While he was a senior at Harvard he was awarded a graduate fellowship from Yale in 1923 to pursue a genetic study of the descendants of the mutineers of HMS Bounty. Shapiro was a student of Earnest Hooton at Harvard University. After completing his graduate work in 1926 he went to work at the American Museum of Natural History in New York City, and while there conducted a few field trips. He is also known for his work with Frederick S. Hulse on Japanese migrant studies. Shapiro was appointed associate curator at the American Museum of Natural History in 1931 and full curator in 1942, the year he succeeded Clark Wissler as chair of the Department of Anthropology. He remained department chair until 1970. Shapiro concurrently taught at Columbia University as an adjunct Professor of Anthropology from 1938 to 1973. Shapiro was a founding member of the American Association of Physical Anthropologists in 1930 (AAPA) and between 1935 and 1939 served a term as its secretary and subsequently as vice-president (1941–42). He served as president of the American Anthropological Association in 1948, and president of the American Ethnological Society from 1942–43. He was elected to the National Academy of Sciences (NAS) in 1949 and served as chairman of the anthropology section from 1953 to 1957. He was president of the American Eugenics Society from 1955–62.

FROM SHAPIRO'S NATIONAL ACADEMY OF SCIENCES BIOGRAPHY: "In the The Heritage of the Bounty (1936) Shapiro refuted the claims of such workers as Charles B. Davenport (1866-1944) and Morris Steggerda (1900-1950), who had concluded from their study of cross-breeding that Jamaican mulattoes were biologically and intellectually inferior to their ancestral groups. Finding no basis for such a pernicious thesis, Shapiro argued that the "dangers" of miscegenation were not only unfounded but that there was every reason to suppose that the production of racial mosaics had been an integral factor in the history of human civilization. Likewise, Migration and Environment (1939) assaulted another "dangerous" myth of the period: the assumed stability of hereditary characteristics. Although the fallacy of this assumption had been exposed in the early 1900s by the seminal study conducted by the Columbia University anthropologist Franz Boas (1858-1942) on the descendants of immigrants born in the United States, the theoretical ramifications of Boas's study had been widely resisted and criticized. Convinced of the validity of the environmental hypothesis, Shapiro orchestrated an ambitious comparative study of two oriental populations in Hawaii, the Chinese and Japanese. Shapiro's analysis of these data provided a striking and influential example of marked differences in a range of physical characteristics which he persuasively argued were unquestionably due to complex environmental influences. (Inventory #: 1170)
$500.00 add to cart Available from
BioMed Rare Books
Share this item