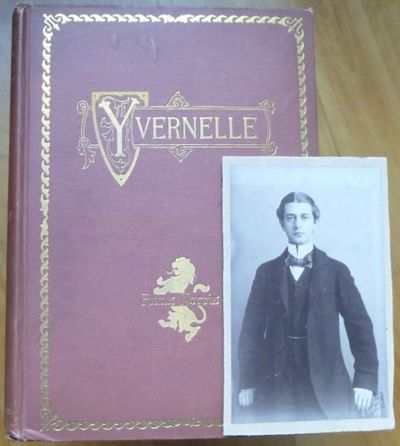 First Edition of the first book by Frank Norris, a romantic narrative poem of medieval chivalry, written when he was a freshman student at the University of California. (He would not graduate there, but rather in 1894 he transferred to Harvard.) His interest in France (he had spent a year at an art school in Paris) would shift toward the realistic fiction of such authors as Zola and Flaubert, with the result that this would be Norris's only such book: his next, seven years later, would be MORAN OF THE LADY LETTY in 1898, followed by his own well-known realistic novel McTEAGUE in 1899. This is a handsome example of book production -- remarkable for being effected for a college student! This is because his family kicked in the money for Lippincott to go all out -- in fact, this is considered to be one of Lippincott's snazziest productions. It is printed on heavy plate paper, with illustrations provided by ten different artists, and with silver-coated endpapers printed with an all-over pattern of roses in intaglio. This copy is in mauve cloth; other colors available (no precedence) were blue, green, old rose, orange, and white, in addition to leather. Condition is near-fine (very slight rubbing at the extremities, a touch of bubbling of the front cover cloth). YVERNELLE has always been a very scarce book -- partly because it was undoubtedly a small printing, and partly because many unsold copies are said to have perished in a Lippincott fire. Blanck 15024. Provenance: bookplate and discreet ink-stamp of J[ohn]. Philips Cranwell, author of such books as MEN OF MARQUE and SPOILERS OF THE SEA. Loosely inserted is an original photograph of Frank Norris standing, wearing suit and bow tie, from probably about 1890 (about age 20); the photograph is in fine condition, affixed to a paperboard card that has some damage on its reverse side. (Inventory #: 14864)
$975.00 add to cart or Buy Direct from
Sumner & Stillman
Share this item

1908
(click for more details about SELECT POEMS OF WILLIAM BARNES)