[The Cottingley Fairies] Alice and the Fairies; Iris and the Gnome; Alice and the Leaping Fairy; Fairy Offering Flowers to Iris [and] Fairy Sunbath 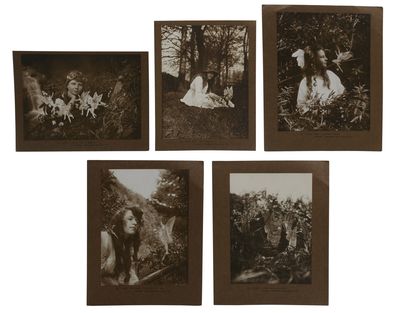 by Griffiths, Frances; Elsie Wright
[Printed by Harold Snelling], 1920. A complete collection of five photographs of the Cottingley Fairies taken by Frances Griffiths and Elsie Wright between 1917 and 1920. One of the greatest photographic hoaxes of all time, perpetrated by two young cousins age 16 and 9. Armed with a camera, the two girls set out to prove the existence of fairies, not knowing that this would cause a great controversy and fool such eminent public figures such as Arthur Conan Doyle, an author known for creating the beyond-iconic character Sherlock Holmes, a fictitious detective renowned for his proficiency in observation, deduction, forensic science and logical reasoning.
Vintage sepia silver gelatin print photographs mounted on original brown card with embossed brown title and copyright, loosely housed in 8"x10 brown card wallet with crown emblem embossed on upper cover and tissueguard tipped in at inner fold. The images are of varying dimensions, "Alice and the Fairies" is 200 x 150 mm; "Iris and the Gnome," 152 x 198 mm; "Alice and the Leaping Fairy, 158 x 250 mm; "Fairy Offering Flowers to Iris," 153 x 203 mm; "Fairy Sunbath, Elves, Etc." 142 x 194 mm. Near Fine with light creasing to wallets, tissueguards and mounts, slightly affecting the corners of two images, "Fairy Offering flowers to Iris," and "Alice and the Leaping Fairy." Price marked on rear of one wallet and one image. Complete sets in original sleeves are scarce, and these images are in a larger format than most that have turned up at auction over the years.
From July of 1917 to August, 1920, in a small village of Cottingley, near Bingley in Yorkshire, the two cousins produced a series of photographs. Originally conceived a joke, the duo borrowed Elsie's father's camera, and used colored paper cut-outs and hat pins to create their fairy scenes. Though her father thought the images were fake while developing the prints, in 1919, Elsie's mother Polly brought them to members of the Theosophical Society in Bradford where they were giving a lecture about fairy life. The hoax spiraled out of control. First, leading society member Edward Gardner enlisted photography expert Harold Snelling to produce "enhanced" prints of them to be sold at Gardner's lectures in 1920. From there, leading spiritualist Conan Doyle became aware of them and wrote an article about the proof of fairies in an issue of The Strand Magazine. Despite attracting ridicule, the pictures garnered huge publicity and a great controversy ensued among scientists and writers, enthusiastically debating if they were real or not. It was not until 1983 that Elsie and Frances admitted how the images were made, though Frances maintained until the end of her life that while four of the images were faked, one showed genuine fairies and was not produced using trickery. (Inventory #: 140942373)
$32,000.00 add to cart Available from
Burnside Rare Books
Share this item
Burnside Rare Books
Offered by

New York : Alfred A. Knopf , 1935
(click for more details about Waiting for Nothing)