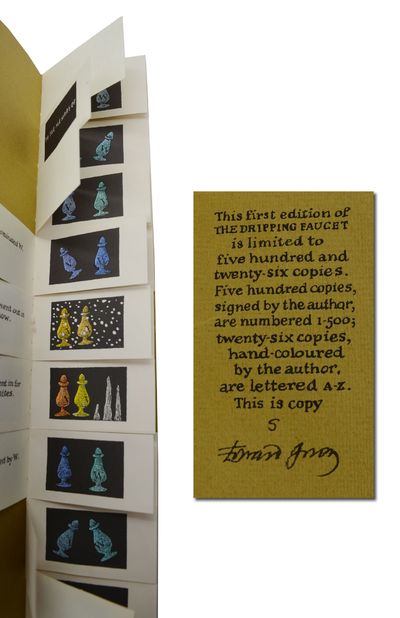 by Gorey, Edward
Worcester, MA: Metacom Press, 1989. First Edition. Near Fine. First edition, signed limited deluxe issue. One of 26 lettered copies signed by Edward Gorey and with illustrations hand-colored by him as well. Near Fine with shallow, faint creases to wraps. Tall, thin quarto (2 1/4" x 11"), in publisher's string-bound illustrated mustard wraps printed in black. A "cut-apart" book with four sheets sliced in nine sections, allowing 1,458* combinations of tiny, tedious and terrible tales to be told. (*Toleando claims a combination of 2,903 different ways it can be read, while the cover states 1,458.) Toledano A94a. (Inventory #: 140942386)
$4,200.00 add to cart Available from
Burnside Rare Books
Share this item
Burnside Rare Books
Offered by

New York : Alfred A. Knopf , 1994
(click for more details about The Crossing)
View all from this seller>