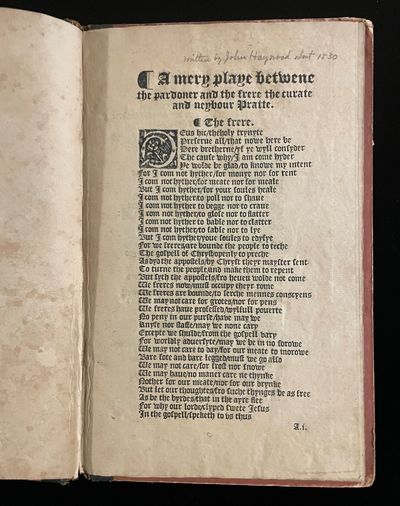 by (Heywood, John)
London: George Smeeton, 1820. Facsimile Edition and First Thus. Hardcover. Very Good. Facsimile edition about 1820 printed by Smeeton of that published in 1533 by William Rastell 8vo, 16 unumbered pages in Gothic type, bound in quarter leather with gilt spine titles over orange boards. Title on spine reads "Mery Playe betwene the Pardoner and the frere 1533 Reprint" Boards worn, binding firm, leaves uniformly toned. A pencilled note on the title page say around 1530. Printed by George Smeeton, St. Martin's Church Yard, we assume around 1903 as there is a note on the ffe " from G. W. Wales est1903" Another note in different hand on the ffe says "only 20 copies of this reprint were struck-offn- see no.117 in Eyton catalogue" Written by John Heywood (c1497 - c1580) was an English writer known for his plays, poems, and collection of proverbs. Although he is best known as a playwright, he was also active as a musician and composer, though no musical works survive. A devout Catholic, he nevertheless served as a royal servant to both the Catholic and Protestant regimes of Henry VIII, Edward VI, Mary I and Elizabeth I. Printer George Smeeton (c1800-1828) was an English printer and compiler of biographical collections. Smeeton rose to the proprietorship of a printing business in the neighbourhood of St. Martin's-in-the-Fields in Westminster. He became a strong ally of James Caulfield, of Wells Street, off Oxford Street. He moved to the Old Bailey, and then to Tooley Street, Southwark, by 1828. As for only 20 copies being printed, WorldCat lists only tow institutions with Smeeton printing and that limitation statement in the enrty. Elsewhere 18 insititutions have the title but no mention of the limitation. In any event, uncommon. (Inventory #: 012743)
$675.00 add to cart or Buy Direct from
Johnnycake Books
Share this item

by McIlvane, Mabel (introduction by)