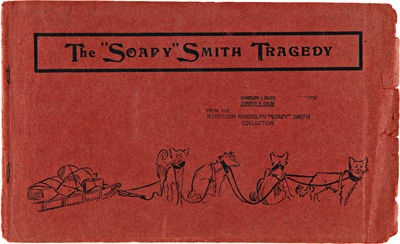 by [Le Febre, H.B.]
Skagway, Ak.: Shea & Patten, 1907.. [24]pp., each with a photo-illustration on the recto and text on the verso. Oblong octavo. Original pictorial red wrappers, stapled. Wrappers worn around the edges, with a few small chips and tears. Previous owner's ink stamp on the front wrapper. Very clean internally. Very good. An early, illustrated source for the life and misdeeds of the con artist and swindler, Jefferson Randolph "Soapy" Smith, the most notorious outlaw of the Klondike Gold Rush in Alaska. Known best for swindling his victims through his gambling dens, saloons, and auction houses, Smith's criminal behavior began in Colorado when he was not yet twenty, and ended with his death at age thirty-seven in a shoot-out on a wharf in Skagway. The many photographic illustrations are from images by the Case & Draper firm of Sitka, and show Soapy Smith, his victims, and his stomping grounds, as well as several morgue photographs of Smith's corpse. "This exceedingly rare little book is said to have been written by H.B. LeFevre [sic], of Skagway. It is a condensed history of the reign of terror and outlawry in White Pass and the Skagway country in 1898, the formation of the vigilance committee, Soapy Smith's counter organization of thugs and cutthroats known as the 'Law and Order Committee of 303,' and the killing of Soapy and the breaking up of his gang" - Adams. "The booklet was no doubt intended to promulgate jokes, laughter, and barroom conversations about local politics. No one, especially its creator, meant for it to be taken seriously, much less to promulgate a legend" - Spude. Printed by the DAILY ALASKAN PRINT in Skagway, authorship has been attributed to H.B. Le Febre (or Le Fevre), though Shea & Patten are identified on the titlepage as "compilers." KURUTZ, KLONDIKE 529. HOWES L229. WICKERSHAM 1606. TOURVILLE 2672. ADAMS, SIX-GUNS 1988. SMITH, PACIFIC NORTHWEST AMERICANA 9385. SOLIDAY IV:19. Spude, Catherine Holder, "THAT FIEND IN HELL": SOAPY SMITH IN LEGEND (Norman, Ok. 2012). (Inventory #: WRCAM57236)
$1,500.00 add to cart or Buy Direct from
William Reese Co. - Americana
Share this item