LETTERS TO A YOUNG GENTLEMAN COMMENCING THE EDUCATION: TO WHICH IS SUBJOINED A BRIEF HISTORY OF THE UNITED STATES 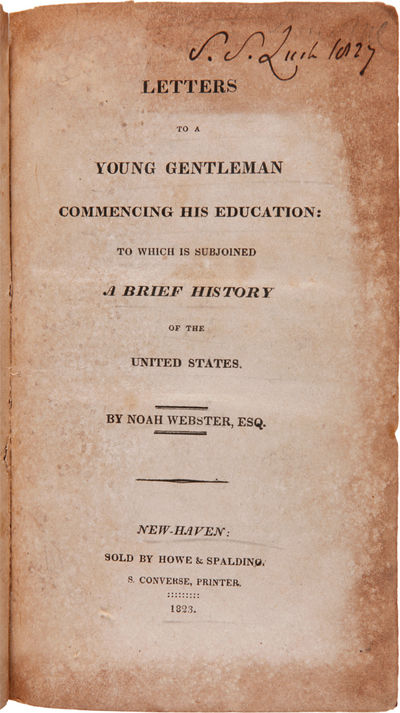 by Webster, Noah
New Haven: S. Converse, Printer, Sold by Howe & Spalding, 1823.. 335pp. Contemporary calf, expertly rebacked in matching style, spine ruled in gilt, gilt morocco label. Leather bookplate of noted grammarian William Safire and the Green Knoll bookplate of Roswell and Emily E.F. Skeel on front pastedown. Contemporary ink ownership inscription on titlepage. Text tanned, minor foxing throughout. Good. The Skeel-Safire copy of the first edition of this unusual Webster publication. In a series of nine letters to an unknown and likely universal correspondent, Webster discusses the usual array of issues surrounding grammar and parts of speech, as well as virtue and other moral ideals, and also comments on the English language dictionaries of his day, such as those compiled by Johnson, Sheridan, and Kenrick. Following the letters is a "Summary History of the discovery and settlement of America from the time of English settlement through the American Revolution, "adapted to the use of families and schools - and forms a convenient Manuel [sic] for travellers and seamen." In subsequent years, Webster's American history would be expanded and reissued, but this is its first appearance.

A esoteric Webster item, with notable etymology-related provenance, having been owned by both Emily Ellsworth Ford Skeel, Webster's granddaughter and bibliographer, and William Safire, the preeminent popular American language and grammar expert of the late 20th century. Skeel compiled A BIBLIOGRAPHY OF THE WRITINGS OF NOAH WEBSTER and published the work in 1958; books from her library are scarce. Safire was an author, journalist, and speechwriter who wrote the long-running column "On Language" for the New York Times.

An interesting work by the foundational American language expert, owned by his granddaughter who was also one of his bibliographers, and then the most notable public expert on language in late 20th- century America. SKEEL 533. SABIN 102365. (Inventory #: WRCAM56705)
$2,250.00 add to cart or Buy Direct from
William Reese Co. - Americana
Share this item