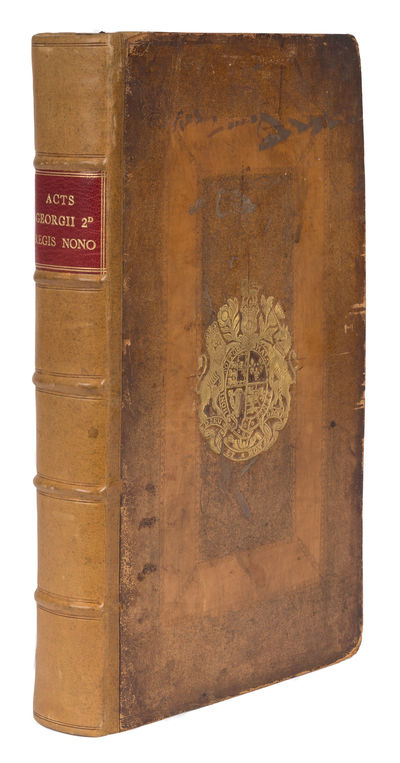 by Great Britain; George II
1735. Public and Private Acts of Parliament, 1734-1735 [Great Britain]. George II [1683-1760], King of Great Britain. Anno Regni Georgii II. Regis Magnae Britanniae, Franciae, & Hiberniae, Nono. At the Parliament Begun and Holden at Westminster the Fourteenth Day of January, Anno Dom. 1734 in the Eighth Year of the Reign of our Sovereign Lord George the Second, By the Grace of God, of Great Britain, France, and Ireland, King, Defender of the Faith, &c. And From Thence Continued by Several Prorogations to the Fifteenth Day of January, 1735. Being the Second Session of this Present Parliament. London: Printed by Thomas Baskett, 1735 [i.e. 1736]. 567, [7] pp. Same general title page preceding each act, Acts IV-XXXIX dated 1736. Folio (12-1/4" x 7"). Contemporary paneled calf, gilt royal arms to boards, rebacked in period style with raised bands, blind fillets and lettering piece to spine, blind tooling to board edges, edges speckled red. Light rubbing to boards, some scuffs, nicks and scratches, moderate rubbing and light wear to board edges, corners bumped and worn, hinges mended, small later bookseller ticket to front pastedown ("George Gregory, Bookseller to H.M. Queen Alexandra, Bath"). Light toning to interior, somewhat heavier in places, occasional light foxing, faint offsetting to first three leaves, small tear to bottom-edge of leaf 7E (pp. [569-570]). An appealing copy. $500. * A collection of 39 acts passed in the second session of the eighth Parliament of Great Britain, with tables listing the titles of the public acts and summaries of 39 private acts. Some of the more interesting acts involve unsuccessful attempts to curb alcohol consumption by raising excise and manufacturing taxes, including the so-called "Gin Act" of 1736. Also included is the "Witchcraft Act" of 1735, which made it a crime to accuse others of witchcraft and abolished the practice of witch-hunting in Great Britain. (The last legal execution for witchcraft in the British Isles took place in 1727). English Short-Title Catalogue N51379. (Inventory #: 72941)
$500.00 add to cart or Buy Direct from
Lawbook Exchange
Share this item

8" x 10" Group Portrait of the Warren Court, Signed by the Justices

1955
(click for more details about 8" x 10" Group Portrait of the Warren Court, Signed by the Justices)

The Carriers' Annual: To the Patrons of the Daily Evening Transcript

1833
(click for more details about The Carriers' Annual: To the Patrons of the Daily Evening Transcript)
View all from this seller>