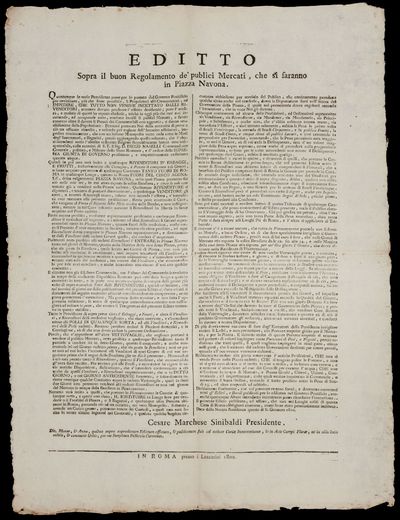 A rare survival of such an ephemeral piece (unrecorded on ICCU): a large broadside issued during the nine-month occupation of Rome following the fall of the Roman Republic, and proclaiming a complete revision of the running of the city's public market to prevent "hoarders and scalpers" from inflating food prices beyond the means of the "most sensitive" members of the populace during this tumultuous period.
The edict instructs, for example, all retailers of vegetables and fruits to arrange contracts exclusively during daylight hours, and only under their official banners; any retailers found bringing, or intending to bring, wholesalers into the marketplace will be considered in contravention of the law. Retailers are also prohibited from forming collective buying groups (which lead to 'infamous monopolies'). Further regulations touch on sellers of poultry, interactions between retailers and wholesalers, and the physical locations of permitted activities. The trades in domestic pigeons and wild game, however, are exempted from these stringent regulations.

The broadsheet also gives details of the enforcement of the new rules. Anyone not complying with the regulations after three days of their posting will suffer the consequences, and trials of the accused will take place between 22 and 24 hours and for 1 hour the following morning, in the market square itself. The penalties are stiff: for the first offence, 25 scudi; for the second, 50 scudi and a public beating; while the third warrants a 100 scudi fine and 5 years of public labor. Fines will also be imposed for passing false currency. The edict ends with a stern public hygiene order reminding all retailers of the prohibition of fish-selling in the marketplace. The public is also ordered to make use of the fountains in a civilised manner, and not to throw rubbish into the fountain or onto the streets.
The Piazza Navona became the official market square of Rome in the 15th century, and remained so until the 1860s when the site was transferred to the Campo de' Fiori. Produced during a period of tremendous political upheavel, the present document provides us with a surprisingly intimate insight into the problems of running such an enormous concern. As the broadside notes, the Papal Government had formerly been responsible for the orderly running of the marketplace, but in 1798 the short-lived Roman Republic, based upon the principles of the French Revolution, had seized power and exiled the Pope. According to the document, many "abuses" were committed during the "so-called" Republican tenure, and indeed the "greed and malice of those who have been able to evade the rules" has led to the need for tighter regulation. Today, it complains, many dealers hoard more than they sell, rendering public markets 'inutili' and driving food prices far higher than they should be, in turn affecting the "most sensitive" segment of the population. The present edict was issued under the authority of His Excellency Diego Naselli, a Neapolitan commander whose troops had invaded the Republic in September 1799. However by July 3rd, seven months after the edict's publication, the city was returned to the authority of the Pope.
* Unrecorded in ICCU or OCLC. (Inventory #: 4585)
$1,500.00 add to cart Available from Martayan Lan
Share this item
Martayan Lan, Inc.
Offered by