Reflections on the Decline of Science in England, and on Some of Its Causes 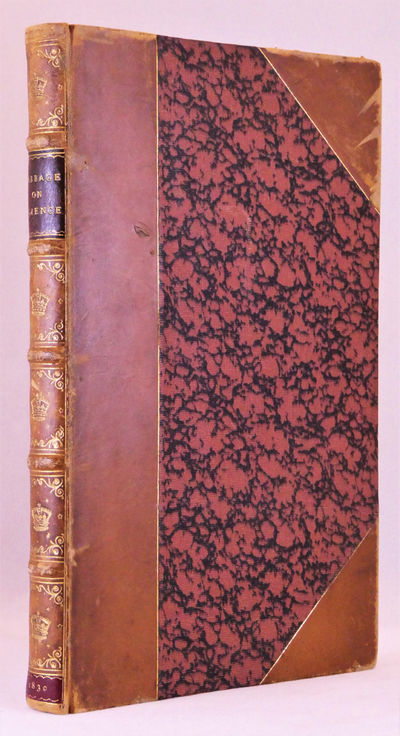 FIRST EDITION OF SCATHING DIATRIBE AGAINST THE ROYAL SOCIETY BY ENGLISH ORIGINATOR OF THE CONCEPT OF THE DIGITAL COMPUTER--COPY OF PROMINENT JOURNALIST OF THE PERIOD.

CHARLES BABBAGE (1792-1871) was an English polymath, mathematician, philosopher, inventor and originator of the concept of a digital programmable computer. In The Exposition of 1851, or Views of the Industry, the Science and the Government of England (1851) he pointed out the shortcomings of the British educational system. His Reflections on the Decline of Science and some of its Causes (offered here) aimed to improve British science, and more particularly to oust Davies Gilbert as President of the Royal Society, which Babbage wished to reform. It was written out of pique, when Babbage hoped to become the junior secretary of the Royal Society, as Herschel was the senior, but failed because of his antagonism to Humphry Davy. Michael Faraday had a reply written, by Gerrit Moll, as On the Alleged Decline of Science in England (1831). On the front of the Royal Society Babbage had no impact, with the bland election of the Duke of Sussex to succeed Gilbert the same year. As a broad manifesto, on the other hand, his Decline led promptly to the formation in 1831 of the British Association for the Advancement of Science.

HISTORICAL CONTEXT: Reflections on the Decline of Science in England, and on Some of Its Causes is one of seven early 19th century science books described in James Secord's Visions of Science: Books and Readers at the Dawn of the Victorian Age" (2014). These seven books, "fire the imagination of a generation that believed science was on the verge of transforming the human condition. ... The Decline of Science portrayed English science as moribund and corrupt, and looked to the Continent, especially to France, for models of scientific reform. Appearing in May 1830, the book sold badly—it went through only one edition, probably of less than 750 copies—but it stirred up a storm of discussion, debate, and distress. Much of the argument in Decline revolves around the issue of how research should be communicated in print, and how its results should be made available to various audiences. Independently wealthy and educated at Cambridge, Babbage had a wide acquaintance with metropolitan literary and political circles, which he used, through his famous evening parties in his house at Dorset Street, to raise the position of science in national life. Like a true accountant, the narrator of Decline directed his fire at those who worked for pay, whether for the state, for a public company, or for a learned society. The book named names, and claimed not to hide criticisms of individuals under general condemnation. Young men were currently discouraged from cultivating science after leaving university because science—unlike medicine, the clergy, law, and the military—was not 'a distinct profession', with status and pay. The taxonomy of fraud in Decline provided a tool whereby science could assume its rightful status as a completely open enterprise, comprehensible not just to adepts and experts, but to 'ordinary understandings' more likely to be fooled or misled. The most significant long-term effect of Decline was to open a general discussion of the political economy of intellectual life, the suppression of ignorance and fraud, and the promotion of the use of knowledge for human needs, would best be served by secular—not religious education; for among the unenlightened, even true religion was tinged by 'superstition' and developed irrational habits of thought."

PROVENANCE: GEORGE AUGUSTUS HENRY SALA (1828 - 1895), was an English journalist. He had become in 1857 a contributor to the Daily Telegraph, and it was in this capacity that he did his most characteristic work, whether as a foreign correspondent in all parts of the world, or as a writer of "leaders" or special articles. His literary style, highly colored, bombastic, egotistic, and full of turgid periphrases, gradually became associated by the public with their conception of the Daily Telegraph; and though the butt of the more scholarly literary world, his articles were invariably full of interesting matter and helped to make the reputation of the paper. He collected a large library and had an elaborate system of keeping common-place books, so that he could be turned on to write upon any conceivable subject with the certainty that he would bring into his article enough show or reality of special information to make it excellent reading for a not very critical public. In 1892, when his popular reputation was at its height, he started a weekly paper called Sala's Journal, but it was a disastrous failure; and in 1895 he had to sell his library of 13,000 volumes (one of which is offered here). His name goes down to posterity as perhaps the most popular and most voluble of the newspaper men of the period. (Inventory #: 1236)
$1,500.00 add to cart Available from
BioMed Rare Books
Share this item