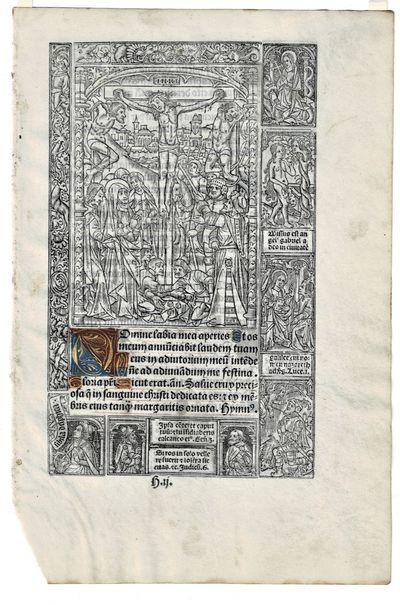 by Horae Beatae Mariae Virginis.
France?, Early 16th century. Very Good. Single octavo leaf H2 from an unidentified Book of Hours, 150 x 223 mm. Recto (Psalm 50) shows a large, elaborate woodcut of the Crucifixion, framed within a woodcut border populated with Biblical characters (a saint astride a dragon, Eve before the Tree of Knowledge, Mary instructing the archangel Gabriel, etc., but also a secular hunting scene with a horn-blowing hunter, a stag, a rabbit, and a barefoot servant. Large 17mm decorated letter D in blue, red and gold, and smaller letters G and S in red and gold, and an ampersand in blue and gold. The verso (Psalm 22 and others) shows text surrounded by woodcut border populated with biblical scenes and vine scrolls, as well as a grotesque figure composed of human, fish, and bird elements. Three medium size (1 cm) two-tone initials (either red and gold or blue and gold), and 9 smaller (5mm) decorated initials. Discreet remains of hinging tape at top corners. (Inventory #: 6581)
$950.00 add to cart Available from
Rare Book Studio
Share this item
Rodger Friedman Rare Book Studio
Offered by