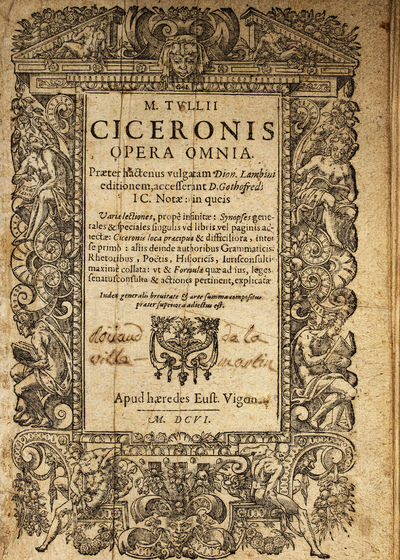 
Quarto. Four books in one. This collected edition includes the rhetorical works, the orations, the
epistles with the Vita of T. Pomponius Atticus by Cornelius Nepos, and the philosophical works.Pagination: Title in a typographical frame engraved on wood, text on two columns, (4) ff., 436 coll.,
leaf of blank, 958pp, leaf of blank, 635pp, leaf of blank; 714pp, (39) index.A beautiful Geneva binding of the period Quarto. Contemporary smooth calf, spine crown a little rubbed. Some
slight soiling; otherwise, a very good copy with highly gilt decorated cover. The entire central gilt panel of each covers forms alarge oval design of a central shield of three crowns with a bishop's hat and staff devices above and two
lions siting astride. (The coat of arms of Léonor d'Estampes deValençay, abbot of Bourgueil, archbishop of Reims).*

Printed by the heirs of the printer/publisher Eustache Vignon who was French, born in Arras in 1530and died in Frankfurt am Main in 1588. Vignon went into exile to Geneva in 1555 where he took
a job as a printer with Jean Crespin, a compatriot from Arras, of whom he became son-in-law andpartner. In December 1559 he married Marguerite Crespin (born 1545), who gave him five
children. The prolific Vignon's book production amounted to about three hundred and twenty-fiveeditions, published between 1573 and 1589, mostly in Latin. His heirs produced a further hundred
and fifty titles through the first decades of the 17th century. This edition is preceded by three earlierVignon edition of Cicero: 1588, 1594, 1596.
1* Provenance Leonor d'Etampes de Valencay, (1589-1651). Bishop of Chartres and later
Archbishop of Rheims. Leonor d'Etampes was a prominent figure in the French counter-reformationand notable book-collector, many of whose books can be found in the Bibliotheque Nationale.
Leonor d'Etampes had been endowed with several abbeys at a very young age, including that atBourgueil. He was elevated to the archbishopric of Reims in 1641. His coat of arms was struck after
the creation of this binding, but probably before 1620, the date of his appointment to the bishopricof Chartres. A colorful character, he is remembered for his intelligence, his preaching but, as it has
been reported, also for his gluttony and his determination to steal the good of others.Tallemant des Réaux, who dedicated one of his Historiettes to him, wrote: "Leonor d'Estampes had
been very well studied and had a happy memory. He had a pleasant mind, was well made of hisperson; but there has never been a man so born to good food and fraud." (Historiettes in La Pléiade,
I, 422-432).

Regarding the relationship between the Catholic church to Cicero: we should remember that Cicero
was one of the few pagan authors, who until modern times, was studied and even revered by theCatholic church. Andrew Greenwell notes that of the 3,706 citations or quotations in the Catechism
of the Catholic Church, all but one are citations to or quotations from Christian sources. The onepagan citation in the entire Catechism is by Cicero. It is found in § 1956 of the Catechism, which
treats of the natural law. ** "It is fitting that the Church relies on a pagan to announce to the faithfulthat there is a natural moral law. The point the Church is trying to make is that the natural law, being
based upon reason and accessible at least in theory without recourse to revelation, is available andaccessible to all human persons universally. Because we are brothers, under one God, we have but
one Law, the natural moral law."Cicero was, however, always studied by important Catholic thinkers. Beginning in the in 4th century,
monastery scribes copied extant manuscripts of Cicero's works. Later, Cicero most notablyinfluenced Saint Augustine. Erasmus, exclaimed upon reading Cicero's De Senectute, "Vix me
contineo, quin exclamen: Sancte Cicero, ora pro nobis." "I can hardly refrain from crying out, HolyCicero, pray for us."


Ex-libris ms. on the title and on the counterplate of Rouaud de la Villemartin, prosecutor for the kingin Guérande (XVIIIe s.).
Leonor d'Etampes 's library was sold in 1653. This edition of Cicero is not listed in his catalog. Hehad numerous edition of Cicero: Catalogue of books of the library of the late Monsieur
l'Archevesque de Reims [Leonor d'Estampes de Valençay].https://www.google.com/books/edition/Catalogue_de_livres_de_la_bibliotheque_d/l4VsNSa-dPs
C?hl=en2
**The natural law, present in the heart of each man and established by reason, is universal in its
precepts and its authority extends to all men. It expresses the dignity of the person and determinesthe basis for his fundamental rights and duties: For there is a true law: right reason. It is in
conformity with nature, is diffused among all men, and is immutable and eternal; its orders summonto duty; its prohibitions turn away from offense .o replace it with a contrary law is a sacrilege;
failure to apply even one of its provisions is forbidden; no one can abrogate it entirely.Cicero, Rep. III,22,33.