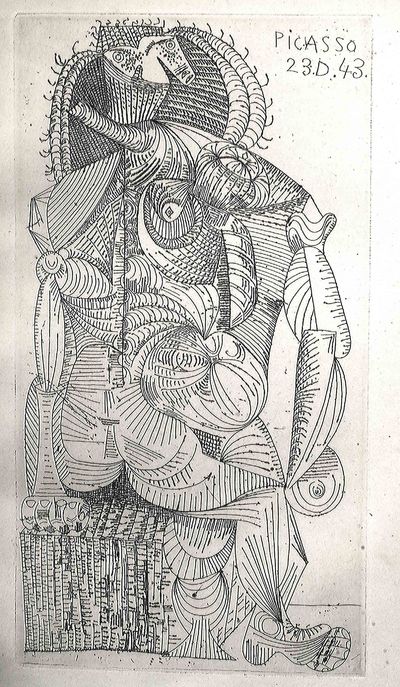 A masterpiece of unbowed and courageous resistance poetry

The poetry of Desnos in Contree is a highly militant. The poetry addresses the German occupation of France, with Desnos' call to defeat the invaders, and his memories of life before the war. Peter Read

Tall 8vo. Title, frontispiece, text comprising 25 poems of which 23 are ornamented with lithographic fragments reproduced fromPicasso's frontispiece. Table of contents and typeset colophon. Picasso's etching (5 3/16 x 9 5/8") in gray and black. In December 1943, Picasso made an etching that was to be used for Desnos' book. The subject has been variously interpreted as Dora Maar* his model and lover; as a seated figure; as a couple embracing. Cramer #39 chastely states "We see a seated figure, represented both
from the front and from the back, or, which is more likely [...] a couple entwined. The style is a combination of cubist and surrealistprocesses." Of other Picasso frontispiece etchings of the period, Contrée show similarities to Le Marteau sans Maitre,
1945. (Goeppert & Cramer #42).

Robert Desnos. (Paris, 1900 - Czechoslovakia, 1945). Desnos' first poems were published in 1917 in La Tribune des Jeunes (Platform for Youth) and in 1919 in the avant-garde review Le Trait d'union also in the Dadaist magazine Littérature. In 1922 he published his first book, a collection of surrealistic aphorisms, with the title Rose Sélavy based upon the pseudonym of Marcel Duchamp. In 1919, Desnos met the poet Benjamin Péret who introduced him to the Paris Dada group andAndré Breton, with whom he soon became friends. While working as a literary columnist for Paris-Soir, Desnos became an active member of this group. During the 1930s, Desnos became friends with Picasso, Hemingway, Artaud and John Dos Passos. Also, he became increasingly involved in politics, writing for many periodicals, including Littérature, La Révolution surréaliste and Variétés. DuringWorld War II, Desnos was an active member of the French Résistance. Desnos was arrested by the Gestapo on 22 February 1944 and was deported to the German concentration camps of Auschwitz in occupied Poland, then Buchenwald, Flossenburg in Germany and finally to Terezín (Theresienstadt) in occupied Czechoslovakia in 1945 where he died of illness and malnutrition.