[Sammelband of 4 pamphlets by or related to Pickering] 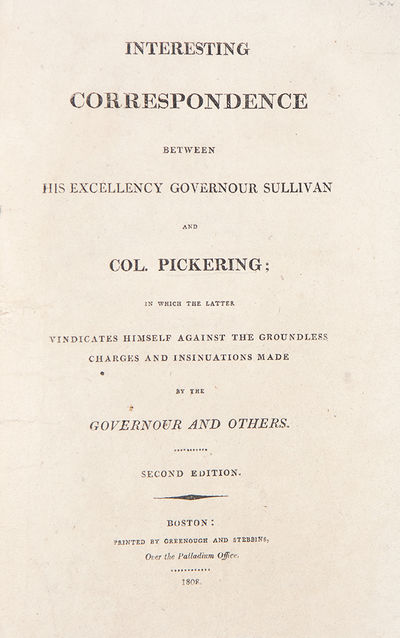 8vo, four volumes in one

1) Interesting Correspondence between His Excellency Governour Sullivan and Col. Pickering; in which the latter vindicates himself against the groundless charges and insinuations made by the Governour and others. Second Edition. Boston: Greenough and Stebbins, 1808. 24pp. 2) Mr. Pickering's Speech, in the Senate of the United States, on the Resolution offered by Mr. Hillhouse to repeal the several Acts laying an Embargo, November 30, 1808 [caption title]. Np, [1808]. 27, [1]pp. Shaw 15937. Includes correspondence between W.B. Giles and Albert Gallatin. 3) Pickering. A Review of the Correspondence between the Hon. John Adams, Late President of the United States, and the late William Cunningham ... By Timothy Pickering. Second Edition. Salem: Cushing and Appleton, 1824. 140pp. 4). Charles Upham. A Discourse delivered on the Sabbath after the Decease of the Hon. Timothy Pickering. Salem: Foote & Brown, 1829. 45. [1]pp., plus errata slip. (Inventory #: 39018)
$250.00 add to cart or Buy Direct from
Donald A. Heald Rare Books
Share this item
Donald A. Heald Rare Books
Offered by