The Book of Genesis Illustrated 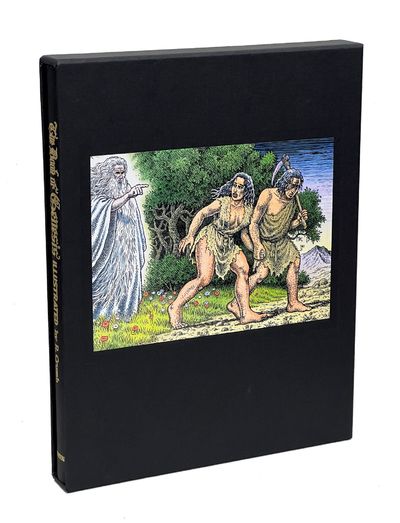 by [Crumb, Robert]
New York: W. W. Norton and Compan, 2009 Illustrated by Robert Crumb. First limited edition, first printing. One of 250 copies signed and numbered by Crumb, this being number 18. Publisher’s black cloth with titles stamped in gilt to front board and spine, serpent illustration in gilt to rear board; housed in publisher’s black slipcase with illustration of Adam and Eve being expelled from Eden to front board. Fine book; fine slipcase. Includes signed print of Chapter 1 illustration of God creating the universe in fine condition. Overall, a crisp and pristine copy. In this book, Robert Crumb illustrates all 50 chapters of The Book of Genesis in his inimitable style. Originally intending to exaggerate the text for humorous effect, Crumb ultimately decided to present the language of The Book of Genesis faithfully, using Robert Alter’s 1996 translation as his primary source. According to Crumb, the text is “so great and strange that it lends itself readily to graphic depictions.” Crumb spent five years illustrating the work, and it was not serialized prior to being released in book form. While the illustrations are graphic in places, they are, by and large, surprisingly restrained considering Crumb’s edgy reputation. The book was a #1 New York Times graphic novel bestseller and was nominated for three Eisner Awards. . Signed. First Edition. Hard Cover. Fine. (Inventory #: RCRUMB001)
$1,000.00 add to cart or Buy Direct from
B & B Rare Books
Share this item

New York: Covici-Friede , 1934
(click for more details about A Cool Million: The Dismantling of Lemuel Pitkin)
View all from this seller>