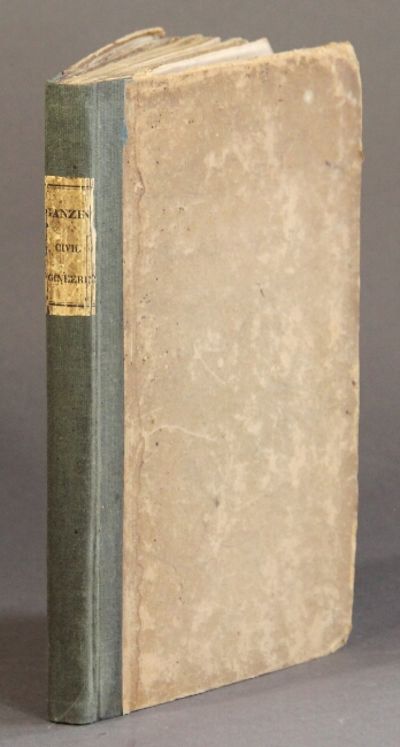 by Sganzin, Mathieu J.
Boston: Hilliard, Gray, Little, and Wilkins, 1827. First edition in English of the author's Programmes ou Resumes de Leçons d'un Cours de Construction (Paris, 1823). 8vo, pp. viii, 220; 6 engraved folding plates; original drab boards, rebacked and preserving the original spine label. Early ownership signature of John W. Taylor of St. Paul, and bookplate of the Minnesota Historical Society noting his gift. Sganzin was one-time director of maritime works in France and professor of Civil Engineering at the Ecole Polytechnique, where he delivered the lectures that formed the basis for this work. The first section concentrates on building materials, the second on road and bridge building, and the third with canals and maritime works. The anonymous translator deleted those parts applicable to France, and added interesting chapters on railways in America, as well as on the instruments and modes of surveying in the United States. This translation was used at West Point until superseded by Mahan's Elementary Course of Civil Engineering, for the Use of the Cadets of the United States' Military Academy (New York, 1837). This copy is rather extensively annotated by an early owner in pencil, likely the aforesaid John W. Taylor. American Imprints 30576; Hitchcock 1140; Rink 2358. (Inventory #: 60330)
$575.00 add to cart or Buy Direct from
rulon-miller books
Share this item

Occasionally. A magazine about Bob Dylan. Nos. 1-5 [all published]

Pattingham, Wolverhampton, U.K. : [publisher not identified] , 1986
(click for more details about Occasionally. A magazine about Bob Dylan. Nos. 1-5 [all published])
View all from this seller>