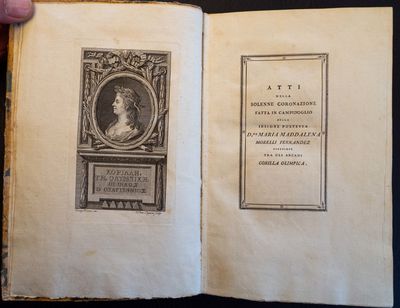 When Maria Maddalena Morelli was crowned the first female Poet Laureate before the Pope on the Capitoline Hill in Rome in 1776, the world cracked in half. Half the Arcadian Academy quit the order and formed their own group, the Academy of Strong Men. In order to qualify for her honor, Morelli (whose Academic name was Corilla Olimpica) had to pass a dozen tests, improvising verses before a panel of 12 judges on 12 themes posed to her by the Academy. She was crowned with laurel finally on the evening of 31 August. There followed masses of pamphlets and broadsides defaming her and/or satirizing her and her supporters. An abbot, Roberto Pucci, who wrote a satirical drama about the coronation was even arrested and condemned to death (a sentence that was commuted after Pucci spent a few months in prison).

The fact remains that Morelli was one of the earliest and greatest of the improvising poets who so fascinated the English generation of Byron, Keats, and Shelley. She lived the life of a rock star, marrying briefly, leaving her husband and child, and following her muse into theaters and palaces, living off the patronage of the rich and famous. Casanova knew her, Mozart performed for her, the Hapsburg Empress Maria Teresa promoted her and the poets and musicians of the day (Metastasio, Pindemonte, Zanotti, Nardini, etc) fought over her. She collaborated with Nardini. Charles Burney, in "The Present State of Music in France and Italy" (1773), wrote "I this evening met with the famous improvvisatrice, Signora Maddalena Morelli, commonly called La Corilla, who is likewise a scholar of Signor Nardini, on the violin; and afterwards I was frequently at her house. Besides her wonderful talent of speaking verses extempore upon any given subject, and being able to pay a ripieno part on the violin, in concert, she sings with a great deal of expression, and has a considerable share of execution. She has, almost every evening, a conversazione, or assembly, which is much frequented by the foreigners and men of letters of Florence."

The volume offered here, printed by Giambattista Bodoni and with a lengthy introduction by him, is the account of the coronation ceremony, followed by dozens of gratulatory verses, mostly in Italian, written by the cream of the Arcadian Academy. The typography and page design are considered one of Bodoni's most lovely. (Inventory #: 6590)
$1,600.00 add to cart Available from
Rare Book Studio
Share this item
Rodger Friedman Rare Book Studio
Offered by

Field Guide of Birds of the West Indies. Guide to all the species of birds known from the Greater Antilles, Lesser Antilles, and Bahama Islandsq

New York : Macmillan , 1947
(click for more details about Field Guide of Birds of the West Indies. Guide to all the species of birds known from the Greater Antilles, Lesser Antilles, and Bahama Islandsq)
View all from this seller>