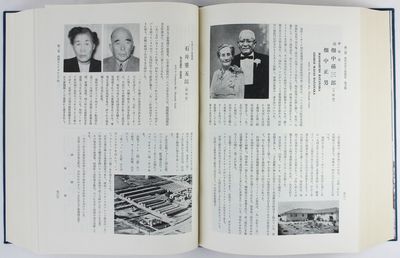 by [Japanese Americana]
Los Angeles [i.e., Japan]: Shin Nichi-Bei Shinbunsha, 1961. Very good.. 23,1431,19pp., profusely illustrated with photographs, including several full-page plates after the text. Publisher's limp blue cloth, gilt spine titles. Original cardboard slipcase with black titles. Minor rubbing to spine. A gargantuan Japanese American directory and almanac published by the New Japanese American News in Los Angeles, but noted as printed in Japan on the colphon page. The work is in great part a Who's Who of notable Japanese Americans from across the country, primarily in California and the Far West, but also Texas, New Mexico, Nebraska, New York, Florida, Connecticut, Illinois, and more. Many hundreds of biographical entries are often accompanied with portrait photographs of the notable person being described. Numerous advertisements are interspersed throughout the text, touting the goods and services of a wide variety of commercial concerns such as the Mitsubishi Corporation, the Sumitomo Bank, Saito Restaurant, various liner services, and dozens more. Almost all of the text is printed in Japanese, save for an Index printed at the front of the work, which lists most of the Who's-Who in English; most entries also include names and addresses in English. The photographic plates at the end feature a portrait of newly-elected President John F. Kennedy, scenes from Japanese American social events, commemorations, visits from Japanese officials, and more. OCLC lists eighteen copies of this massive directory that must have been incredibly useful for the Japanese American community at the start of the Kennedy years. (Inventory #: 2985)
$1,250.00 add to cart or Buy Direct from
McBride Rare Books
Share this item