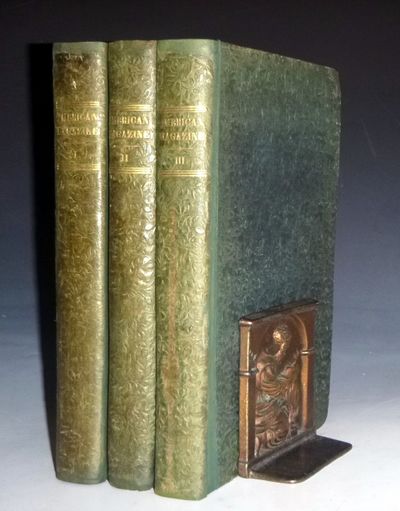 Boston; 1834-1837: Ball and Marshal; John L. Sibly and Benjamin H. Greene, and William D. Ticknor. Small Qurarto. This comprises all three volumes, each in the original monthly parts fully illustrated throughout.. Volume I: 536 pages (Sept. 1834-August 1835). Voluime II: 520 pages (Sept. 1835--Aug. 1836) and Volume III, 486 pages (Oct. 1836-Sept. 1837). The publisher in 1836 gave Nathaniel Hawthorne his first job as editor (though he was unnamed in the volumes and also unpaid). What is of particular interest to Hawthorne scholars begins in Volume II, pages 395-397 where Hawthorne has written : "The Duston Family". His account shows he knew Cotton Mather's Magnalia so he used that along with Peter Parley's Method of Telling About History and R.I. Munchk's The History of Haverhill, Massachusetts. Directly above the sketch on page 395 is an illustration from Parley which were copied and modified by the engraver. Samuel Goodrich or another of the officers of the company clearly directed Hawthorne to take the story and write an artilce on the subject. In one sense, this and other articles in the magazine give us some of Hawthorne's ability to write and tighten up a story. As editor in the American Magazine he edited Dunlap's work on design (see pages 367-368, 428, and 488. It is now known that Elizabeth Manning Hawthorne, his sister, worked as a collaborator while he was editor. A very important set on the sources of New England and believed to have influenced many of the best writers of the era. Bound in green embossed cloth in a floral design, spine lettering and ruled in gilt, two volumes had been rebacked with old spines laid down, scattered foxing, browning to a few leaves of two volmumes, closed tear to three leaves in volume one at page 77. A very good set. (Inventory #: 028743)
$850.00 add to cart or Buy Direct from
ALCUIN BOOKS, ABAA
Share this item

Texas Painters, Sculptors, & Graphic Artists: a Biographical Dictionary of Artists in Texas Before 1942 (signed by the Authors0

by Powers, John and Deborah

Austin, Texas; (2000) : Woodmont Books
(click for more details about Texas Painters, Sculptors, & Graphic Artists: a Biographical Dictionary of Artists in Texas Before 1942 (signed by the Authors0)
View all from this seller>