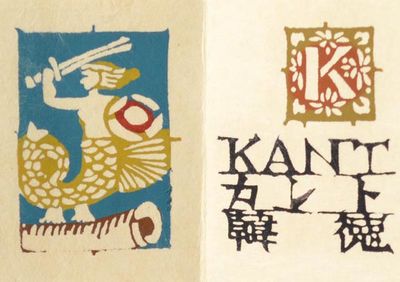 Volume I has A - I, Vol II has J - R and Vol III features S - Z. Original stencil print Ex Libris on the right side features the letter of the English alphabet with a noted person's name in English, with Katakana below it and Japanese characters underneath. Facing page features a design in color reflecting the individual's discovery, work or position. The Alphabet begins with Aisopos, Balzac, Chekhov, Dostoevskii and Edison in Book 1, continues with Jenner, Kant, Liszt and Mozart in Book 2 and ends with Whitman, Xenophanes, Young and Zola in Book 3. Kanzaki's artistry with katazome / kappazuri-e (stencil) technique is well-known and beautifully represented in these volumes.

Each housed in a chitsu with clasp and decorated green and white stenciled front cover and green paper-covered rear boards. Possible erasure at the top of a decorative initial page in the first book. Lovely artwork with good printing in fine condition. (Inventory #: 90973)
$375.00 add to cart or Buy Direct from
Boston Book Company
Share this item