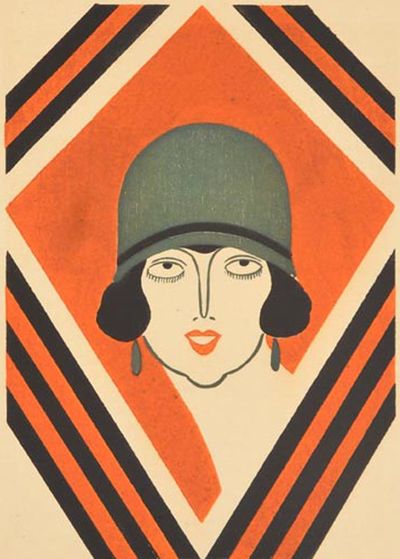 by Sugiura Hisui 杉浦非水
Sugiura Hisui 杉浦非水. Hisui Sōsaku Zuan Shū 非水創作図案集. Kadō 雅堂. Showa 2 [1927]. Second printing. Large portfolio of 50 numbered sheets (36.5 x 27.5cm) of 88 designs in various media and styles (woodcut, lithograph and offset). 36.4 x 27.5cm booklet with printed title and an image of a cat on the cover, yellow, olive and brown design in inside cover, botanical design with similar colors on the facing page overlaid with introductory notes printed in Japanese text. The rear cover has a design with details of the portfolio with the names of those involved in its production in Japanese text.

Housed in an original chitsu 37 x 28cm with gold printed title and a color woodcut of a reclining nude. Chitsu has a laid-down, printed colophon. Stored in the original box 38.5 x 28.5cm with a title slip on binding and a large printed title sheet 28.5 x 22cm in dark red and black with a printed illustration of a bird on the front cover.

A wonderful epitome of Taisho 大正 and Shōwa 昭和 style that was produced using all the most advanced techniques of the time. Large, bold designs, most full page with subjects that include abstract designs, botanicals, birds, animals, f ish, figures, and landscapes.

Sugiura Hisui 杉浦非水 (1876-1965) was an artist, graphic designer and tastemaker who was responsible between the wars and after for Mitsukoshi department stores' trendsetting design and publicity. The most important figure in the development of Japanese commercial art in the 20th century, he was a force to be reckoned with as a practical designer at Mitsukoshi and an educator at the Japan School of Art, the Imperial School of Fine Art and the Tama Imperial School of Art which he co-founded. He even spent two years in Europe in the early 1920s, researching design. He created many portfolios of design examples for professionals, wrote treatises on the principles of design and was a tireless creator of posters and magazine covers. Among a number of shows illustrating his role in creating, "Taisho chic," there was a wonderful retrospective on his lifetime of work at the National Museum of Modern Art in Tokyo in 2000 and one just recently in Kyushu at the Fukuoka Pref. Museum of Art in the spring of 2022.

Wear and dirt staining of box and chitsu with tears to edges. Foxing to brochure cover and edges of some sheets. Otherwise, artwork is in good condition. (Inventory #: 91028)
$8,500.00 add to cart or Buy Direct from
Boston Book Company
Share this item