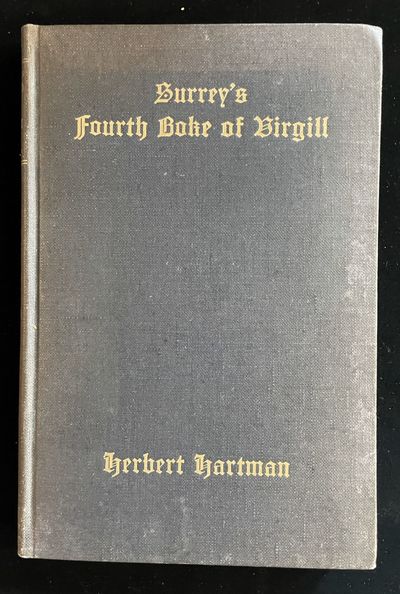 by (Virgil). Hartman, Herbert (essay by). Pforzheimer, Carl (owned by). Johnson, John (printed by)
London: Oxford University Press, 1933. 1st Edition, limited. Hardcover. Very Good. Paper by scholar Hartman on Surrey's Fourth Book of Virgal followed by a facimile reproduction, the original being then owned by banker and bibliophile Carl H. Pforzheimer. Inscribed "with affectionate regards" to an unidentified person by Pforzheimer on the ffe, and dated 19562. This copy #133 of 250 copies for public distribution. 8vo, gray linen, gilt to upper cover and spine, gte. xvii, 54, plus facsimile, printed by John Johnson. A sound copy, clean coves, episodic light foxing, sound copy. Carl Howard Pforzheimer (1879-1957), an American banker and curbstone broker based in New York City, was a founder of the American Stock Exchange and amassed a large fortune on Wall Street as a specialist in Standard Oil stock. An avid collector of rare books, he built up the Carl H. Pforzheimer Collection of Shelley and His Circle, which is now held at New York Public Library. (Inventory #: 012916)
$250.00 add to cart or Buy Direct from
Johnnycake Books
Share this item

OVER AND ABOVE OUR PACIFIC

NY : Brentano's , 1941
(click for more details about OVER AND ABOVE OUR PACIFIC)
View all from this seller>