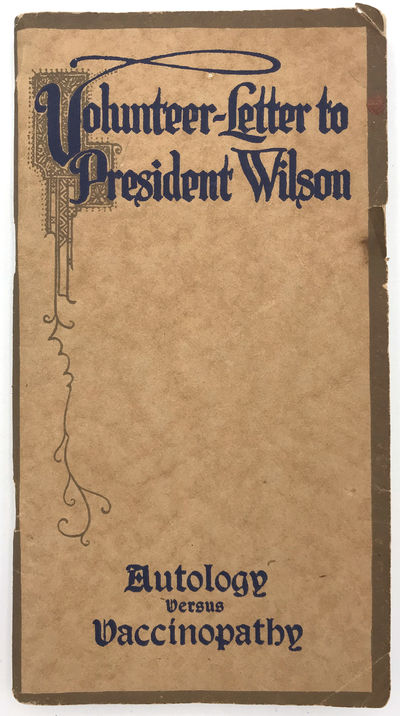 The Pennsylvania State Vaccination Commission, 1919. Very good to fine. Wrappers chipped.. An anti-vaccination incunable: a vehement booklet promoting Dr. E.R. Moras' controversial theory of "Autology", which asserts that all healthy bodies are self-immunizing, vaccination is harmful, and that "There is but one feasible way to mitigate the coming calamity [i.e. the flu epidemic] and to ward off similar future calamities. It is for the people to educate themselves on the subjects and thus force the doctors into submission" (p. 41). The booklet openly expresses its disdain for the medical establishment, stating that "The Layman has a better intuitive grasp of truth than the professional" and that "the common people are always right when they voice an opinion" (p. 49). It also employs fear-based rhetoric: "If this generation fails in its duty to crush disease-breeding vaccinopathy [i.e. the practice of vaccinating the public to curtail epidemics], then let the coming generation prepare for a worse cataclysm of disease frightfulness than humanity has ever experienced" (p. 54). Includes detailed scientific research and letters of support from others in the field, as well as advertisements and prices for Moras' other publications.